My family lived in the Rue de Monceau, in the eighth arrondissement. A relatively fashionable area of Paris; the street owes its claim to fame to some of the notable inhabitants of its Second Empire hotels, including the Rothschild’s, that famous banking family quite well known among the upper-crust. It also placed us squarely in the middle of salon-country. A few streets northeast on the Boulevard Malesherbes was where Mme de Saint-Marceaux had been holding her vendredi salons since almost the beginning of the Belle Époque1; Mme la Princesse Edmond de Polignac was situated just a little westward in the avenue Henri-Martin2. This was, to put it mildly, where everyone who was anyone wanted to have their address, and only anyone who was everyone could have it.

Aside from being a prime location for fashionable real-estate, although hardly anything was ever on the market, the Rue de Monceau also happened to be across the Seine from the Hôtel Pas de Calais, where the American was supposed to be. That said, I was hardly going to traipse across town without knowing for certain that the American girl was, in fact, going to be present when I called. My father, once he had at last exhausted the merits of his paper and was both physically and mentally steeled for another day at the bank, called the concierge of the hotel before arranging a cab, since the chauffeur would be preoccupied driving him to work.

There were several ways to traverse the two and a half mile distance between our house and the Hôtel Pas de Calais. Any other April day, I might have walked, but it had been a rather damp year thus far, and the maid obliged to accompany me would suffer for my enthusiasm for physical activity. Kinder to us both would be to take a hired cab, although I chafed at the thought of spending so much time cooped up in a noisy, smelly automobile…One of my friends in Cadiz had been engaged to a man who drove a Rolls-Royce, one of the most expensive models on the market; it was impossible to hate such a vehicle, but short of that I preferred my own two feet. Nor was I the only, or even the most vocal opponent of the fumes and noise daily polluting the modern city.

Accompanying me on this errand was Praeker, my long-time governess and now something of a lady’s companion. She had come to us before the war, when I was only about seven years old. Because of my father’s position, she had managed to avoid the exile imposed on non-French citizens while the war raged, all the more a blessing because she hailed from the Saarland in Germany.

“It looks like rain,” my companion observed as we sped down the Rue de Lisbonne onto the Boulevard Malesherbes. The faintest hint of a German accent still colored her speech, although she had been a French citizen for several years now.

“I suppose it’s just as well we took a cab, then,” I replied. “I’ve no particular desire to get wet.”

We continued in companionable silence until the bridge over the Seine. Then I asked,

“What do you think she will be like, this American girl?”

Praeker shrugged, doing it very elegantly. “I do not know, mam’selle. I have not met many Americans, only those who come here and make an uproar in the streets.”

“The ones in Montmartre? I shouldn’t think they represent the country very well. From what I’ve heard of New York society, Americans are even more conservative than we are, which hardly shows in the Montmartre crowd.”

At the hotel, we were shown into a semi-private sitting area off the lobby while the concierge rang the American girl’s room. Several minutes passed before a beaming young woman, dressed to the nines in the most extravagant hues of pink I had ever seen, quite literally flounced into the room, rosy-cheeked and out of breath from having run – again, quite literally – down the hotel stairs.

“Hello!” she gushed out exuberantly. “You must be Madame de Saint-Vincent!”

“Oh!” she exclaimed, embarrassed. “I am so sorry. It’s just that you look so grown-up and elegant, like my mother and her friends say I’m supposed to be. I’m Elizabeth Drewry, but you can call me Lizzy.”

“A pleasure, Miss Drewry,” I said, deliberately avoiding the familiar diminutive. Her enthusiasm was so overwhelming that it felt instinctive to draw upon the barriers of rigid politesse in order to find my bearings again. That said, though, her over-enthusiasm rather suited Lizzy. Elizabeth Drewry was one of those girls who always look girlishly innocent. Big blue eyes radiated from a heart-shaped face with impossibly high cheekbones. Both her nose and lips were small in a way only describable as cute, while blond curls peeked out teasingly from her tight silk turban. Her clothes were obviously expensive and from fashionable couturiers, yet there was something eccentric and frivolous about them, as though a slightly mad adolescent had picked them out for their bright colors and bold designs. She was obviously going to take some getting used to; I could not imagine what elegant Parisian society would do with her.

“Mlle Drewry, my mother would like to meet you as well, ” I said, deciding to cut to the point. A general fault of mine has been to be overly direct, something which I have had to learn to circumvent. In this situation, though, I felt that some direction was called for. “Perhaps you would join us for lunch?”

“Oh, how lovely! Yes, of course! A friend of mine says that you live in one of the most fashionable parts of Paris!”

“Let me just change clothes and fix my hair, and I’ll be right back down!”

Before I could tell her that my mother would not mind, not being the type to judge a person so meanly on their clothing, the American had disappeared back up the stairs. Praeker, hiding a smile, wisely took a seat to wait.

Close to half an hour later, we were finally back in the cab. My day was clearly only beginning. No sooner had we turned off the Boulevard Saint-Germain than Miss Drewry jumped up in her seat with a little gasp, eyes very nearly bulging from their sockets.

“Oh, it’s the Quai d’Orsay, right? I forgot how close we were. Let’s just take a quick stroll – I want to look around a bit.” 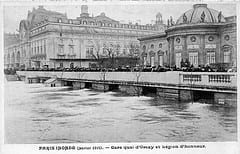 Obligingly, the cabbie turned left instead of continuing over the river. We all clambered out of the automobile and then trailed after Miss Drewry, who had whipped out a Baedeker from somewhere in her frock and was flipping through its contents at a dangerously furious rate. From the piercing stares she directed towards the statuary on the Quai, I thought the stone might come alive in order to follow the only logical course of action – running away.

“It isn’t quite how I imagined, ” she remarked, pensive and somewhat disappointed. “I wonder…”

We had walked far past the Quai d’Orsay by the time we made it back to the patiently waiting cab. Even so, my torment was nowhere near finished. Having crossed the Seine, we then had to exchange the more direct route of the Rue Royale for the wide boulevard of the Avenue des Champs-Elysées, whereupon it was necessary for us to climb out again and, of course, walk the entire boulevard along with its adjoining gardens.

Only a strict society upbringing kept me from reaching out to shake this, this…tourist! I noticed that Praeker slipped the indulgent cabbie an extra few francs before joining us at the door once we’d reached home.

It was by now several hours past the time when we had been expected by my mother. Although she could be very forgiving, I knew that the one thing my mother hated more than anything was for guests to arrive late to a meal.

“I don’t suppose we could just leave her and run?” I muttered to Praeker as I tapped the door knocker. Praeker smiled at me like a mother at a guilty child.

“It would seem somewhat too late for that.”

Indeed, just then the house door swung open, and the butler stood by to bow us inside.