From Montparnasse to Montmartre: modern music scenes in Paris

Perhaps you’ve seen the iconic advertisement for Le Chat Noir in a French souvenir shop and thought, “that’s so French!” Maybe you’ve seen the infamous youtube star Henri the existentialist chat noir and thought, “that’s even more French!” Located in the bohemian Montmartre, Le Chat Noir (which translates to the black cat) was a famous “cabaret artistique” 1
It was here that many famous artists congregated to converse and create. Artists like Debussy and Satie got their start here2 accompanying singers and helping to carve out the definition of “French” music. Though it opened in the late 1800’s, it was still bustling in the 1920’s. Montmartre became filled with cabarets like Le Chat Noir and Moulin Rouge that quintessentially became “so French!” The music scene changed, however, when jazz-filled dance halls became more and more popular. 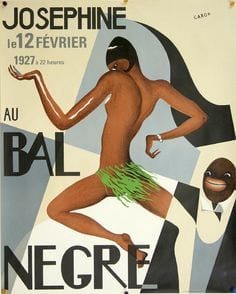 At the mention of jazz, you might thing “that’s so 1920’s!” Actually, jazz was just starting to make its way to Paris in the early 1920’s. In 1924, a popular jazz club opened its doors for the first time. Le Bal Nègre rue Blomet in Montparnasse became a central destination for anyone interested in the “exotic” and “authentic” jazz scene of Paris. For artists, Parisian jazz clubs often proved a fruitful starting point. Not only was there a change in music, but also the role of the audience members. Whereas cabarets were distinctly a show meant to be watched and heard by the audience, jazz was found in dance halls where people were encouraged to practice the latest dance moves. Jazz spread throughout Paris, and was especially popular in Montparnasse and  quickly spread to Montmartre.
3

For more information about Jazz in Montmartre, this video gives a good primer:
The invasion of jazz initially upset many Parisians who feared the replacement of French music by foreign sounds. Despite fears, jazz did not bring about an end to French music, rather in many cases jazz became integrated into French music as artists were able to make the music their own. Both Montparnasse and Montmartre became centers of music for people of all nationalities, social classes, and interests to enjoy music. It is these types of performances that provide for us an idea of alternatives to more formal ballets and operas and in doing so, they provide us with subjects that are “so 1920’s French.”