It was well past midnight when the three of us ambled out of the Palais Garnier in the midst of a crowd of glittering spectators, like a mass of thick tar oozing its way slowly out the door as a shapeless, writhing amoeba. What a strange trio we made; my cousin seemed to be in far better spirits now that he had unburdened his displeasure onto me, while Lizzie Drewry smiled at her surroundings in a manner that was pleased and yet also very confused. From watching her reaction during the performance, I gathered that she had not understood exactly what was going on in the opera and ballet; her opera glasses more often than not had been trained on the ladies of high society and their attire.

I, meanwhile, felt sufficiently rattled and out of sorts, having spent the last three hours listening to Jean-François’ pointed criticism of, well, everything in addition to Mlle Drewry’s pleased commentary on the state of Parisian adornment. The car ride home was silent. I held my wrap tightly around me shoulders as though it were a suit of armor against conversation with either of my companions.

As Jean-François was handing us out of the cab, though, he broke the silence, saying,

“Camille, do you know that there is a modernist exhibition at the Galerie Barbazanges opening in a few days? You should come with me. ”

I shot him a narrow-eyed look.

“I’ll think about it,” I said, still not over the evening’s torments. “Good night, Jean-François.”

As my cousin well knew, modernist art held a strange attraction for me. It went without saying, once I had recovered from the effects of a horrible night at the Opera, that I would acquiesce to accompanying him. There was just one small caveat; my dear mother insisted that I take Lizzie Drewry along.

It was some two miles to the Galerie Barbazanges, far enough that walking in the heels that were demanded by fashion would be uncomfortable. Jean-François arrived to pick us up – Lizzie Drewry, Praeker, and myself – in a cab, thus saving my new shoes from ruin by the streets. Perhaps, under other circumstances, that would matter less, but the Galerie Barbazanges belonged to none other than the (formerly) great couturier Paul Poiret, adjoined to his couture salon1, and I was hardly going to chance him seeing me in anything less than an immaculate wardrobe. To that end, I was attired in a dark blue, crèpe-de-chine tunic that reached nearly to my ankles, as long skirts had recently come back into mode, over which I wore a light jacket and stylishly tied cravat. Even in those days, I looked like I had stepped out of a recent edition of Vogue – though, to be sure, the effect has grown considerably over the decades. 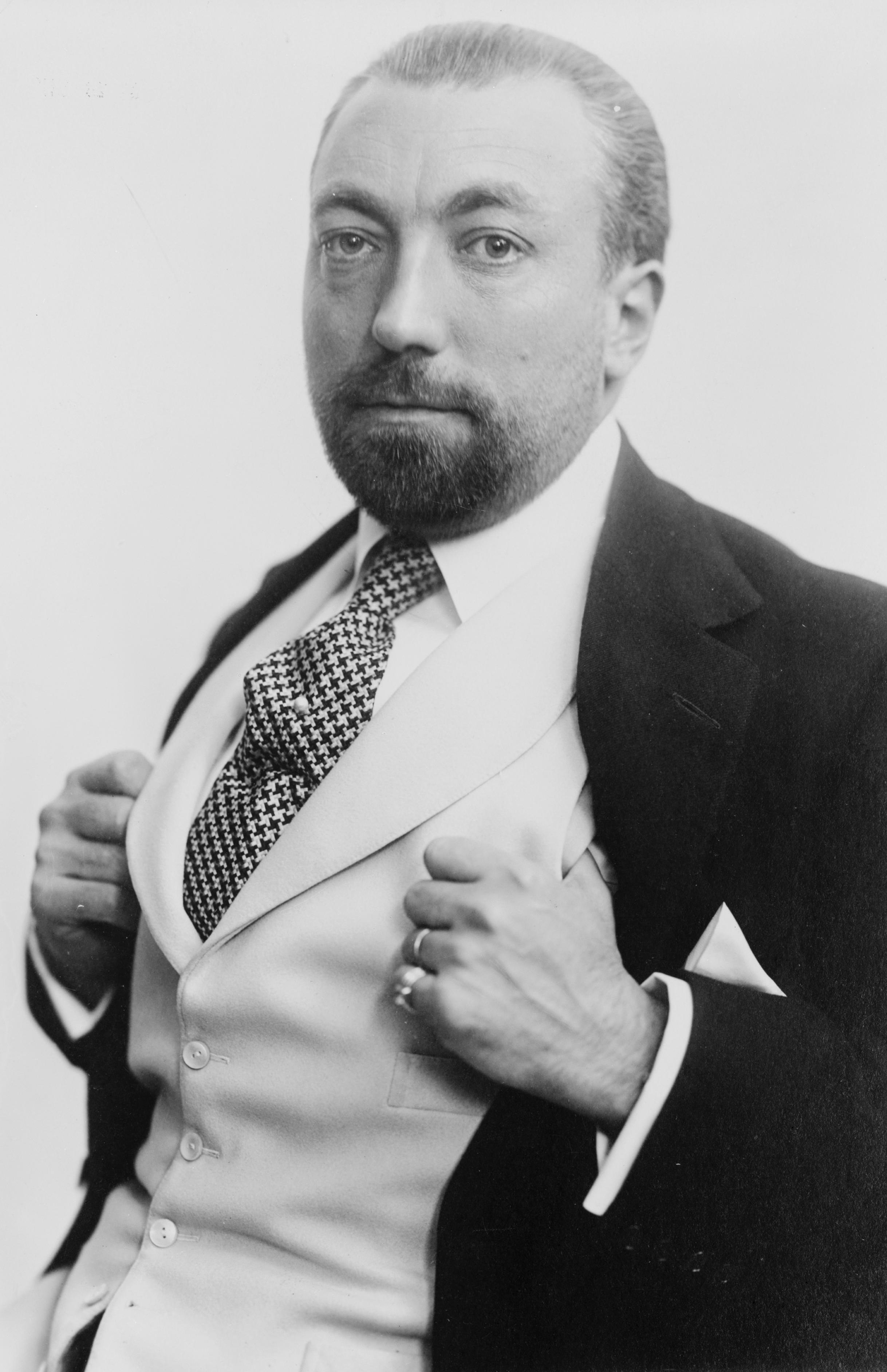 As expected, M. Poiret was in the gallery, having stepped in briefly to observe the spectators for the exhibition. A piano had been wheeled in, unobtrusively placed so as not to detract from the artwork on display but obvious enough to anyone who glanced in the general direction. I could not recognize the pianist; possibly, he was not yet well-known by le Tout Paris, the fashionable crowd.

“Mademoiselle de Saint-Vincent!” the couturier exclaimed as he saw me, directing my attention away from the musical component. “Quelle plaisir! Il y a longtemps.”

“Bonjour, M. Poiret,” I greeted him in return, shaking hands. “It has been some time. ”

“I hear you have been frequenting the salon of Mlle Chanel,” he remarked, sounding rather displeased. “Surely you do not intend to start wearing those dreadfully severe clothes?”

“Simplicity, as you know, monsieur, is very chic2.”

“Ah, yes, simplicity is very important, but one can be simply elegant without losing all sense of glamour.”

I smiled with as much charm as several years of expensive finishing school training could muster. “You know that I will always love your designs, M. Poiret. By the way, allow me to present my guest, Miss Elizabeth Drewry from New York.”

Lizzie was thrilled to be introduced to a couturier whose house had once dominated the spreads of Vogue in tandem with Worth, Doucet, and Redfern. That gave me a few minutes to look around, without distraction, at the modernist paintings.

“Is that a new Matisse, M. Poiret?” I had to ask after a few minutes. He came over to stand beside me in front of the painting.

“Indeed, my sister has loaned it to me. She has excellent connections among the artists.”

“It certainly cannot hurt that she allows them to pay in kind,” I observed. Germaine Bongard, Poiret’s sister and an accomplished couturier in her own right, often accepted works of art in exchange for her own, more functional creations3.

“Ah, oui, c’est vrai. But I must return to the salon – I have a client coming soon. Enjoy the exhibition, Mlle de Saint-Vincent. Perhaps I will see you again soon, in the salon.”

It was not very difficult to take the hint. I knew, as well, that he could use the business. Since the Great War, his business had been unable to compete with modern masters like Mlle Chanel – small wonder that it should irk him to see his clientele running off to other houses.

Lizzie joined me as he hurried off. “How exciting to meet Paul Poiret!” she said, in an almost reverent whisper. “I do wish that I could have one of his gowns. It would make my coming-out so much more splendid.”

“You have not made your début?” I asked. “And yet your mother let you travel to Paris without her?”

“I can be very stubborn,” she admitted. “My mother prefers to give in to me these days rather than spend the energy arguing.”

Well, that was highly unusual, to say the least. I had known that Lizzie Drewry was young, but somehow I had completely missed the fact that she was not even eighteen yet. In truth, it explained a good deal…

We toured the gallery, remarking on the trio of surrealist themes and the one, solitary Picasso. Given that Picasso’s “Les Demoiselles d’Avignon” had debuted here, I always expected to find more of his works at Barbazanges4. It hardly meant that was the case, but such were my expectations. Strange how such things evolve. On a more realistic note, his contract with Rosenberg, for starters, probably limited his display in other galleries. At least, the display of new works.

After an hour or so, Lizzie confessed boredom and went to sit near the window while the rest of us continued to browse. Praeker, mindful of leaving a pre-débutante unattended in a strange place, stolidly joined her. There was something solid and maternal about Praeker that never failed to comfort people.

My cousin and I were deeply entrenched in a debate about the political problems posed by surrealism and other avant-garde movements when we paused by where the two other members of our party were supposed to have been sitting.

“Where did they go?” I asked, baffled. Jean-François shrugged.

“I shouldn’t worry,” he said. “Praeker knows her way around.”

Just then, Praeker came back through the door of the gallery, from the street. Now I began to worry in earnest, especially seeing the expression on my companion’s face.

“Praeker, what is it? Where is Lizzie Drewry?”

“Ich weiß es nicht,” she cried, slipping back into German in her exasperation. “Mlle Drewry, she disappeared when I went to check the time. I cannot find her. I have gone up and down the streets, but I cannot find her.”

The three of us exchanged horrified glances. We had lost the American.