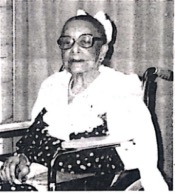 “The Obituary” in A Service of Witness To The Resurrection Celebrating the Life Of “Princess” Grace Brown program, Greensboro, NC, August 26, 1993, 1. Courtesy of Phylicia Fauntleroy Bowman.

Grace Evangeline Gibbs (later Brown) was born on October 4, 1892, in Tallahassee, Florida.1 She was the daughter of Alice Menard and Thomas Van Renssalaer Gibbs.2 According to her niece, Phylicia Fauntleroy Bowman, Thomas Van Renssalaer Gibbs co-founded Florida A&M University, and her mother taught there.3 Grace Gibbs’ maternal grandfather, John Willis Menard, was the first Black man elected to the United States Congress, specifically the House of Representatives (though opposition to his election from his opponent prevented him from being seated).4 Gibbs’ prominent family connections manifested even further, although this occurred due to a tragedy in her formative years. When her parents died a week apart when she was 6 years old, her cousin Harriet Gibbs Marshall—founder of the Washington Conservatory of Music—adopted her, while her five other siblings went to live with other family members.5

As she was raised by Gibbs Marshall, a prominent music educator, she studied piano privately with her mother (as evidenced by a 1902 performance of Gurlitt’s “Sunshiny Morning” reported in DC’s Colored American) and later with Mrs. Gabrielle Lewis Pelham (at least in 1904).6 During the summers, Grace Gibbs would go to Oberlin, Ohio—where Gibbs Marshall was the first Black woman graduate from the Oberlin Conservatory—and visit.7 For her own music education, she ultimately attended the Washington Conservatory of Music; while a student there, she performed in a play, sang in the institution’s chorus, and continued to hone her piano skills. She graduated from the conservatory’s teacher’s course in 1912 and performed along with Ruth Grimshaw and other graduates at their commencement. Click here to see the newspaper clipping detailing the commencement performance.8 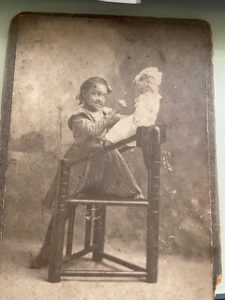 Gibbs Brown as a child, Courtesy of Phylicia Fauntleroy Bowman

Gibbs performed around DC between 1913-14 and joined the faculty of the Washington Conservatory in 1917, listed as a “popular music teacher for children” in the September 15, 1917 issue of the Washington Bee.9 In June 1918, she married Chase K. Brown, a store keeper from North Carolina, and eventually moved to Greensboro, NC, where she resided the rest of her adult life.10 In Greensboro, Gibbs Brown taught first grade at David D Jones Elementary School, then at Jacksonville High School. She retired from her four decade public school teaching career in 1958.11 Along the way, Gibbs Brown received a college degree in education from North Carolina A&T State University, Greensboro, in 1939.12 Additionally, she taught private piano lessons in her home for 75 years—remarkable not only because of her evident longevity (she reached her 100th birthday in 1992 and passed away in 1993), but also when considering the extensive network of students whose lives she touched through the seven decades of operating her studio.13 Click here for more information on Washington Conservatory teachers and their networks. Gibbs Brown’s many students showcased their skills through annual piano recitals in the sanctuary of St. James Presbyterian Church.14

According to her obituary, Grace G. Brown “was president and member of the Altar Guild for 25 years, a member of the Lucy Laney and Grace Brown Circles, United Presbyterian Women Society and Adult Sunday School Class at her church. She was also a charter member of the Ever Achieving Retired Teachers Club, and the Warnersville Senior Citizens Club.”15 Such community involvement provides a glimpse into an active life beyond teaching. Furthermore, considering how she gained knowledge and experience from her adopted mother, Harriet Gibbs Marshall, and her storied family who encouraged her to “go out and do something beneficial in the world to keep the links in the chain,” Gibbs Brown was able to leverage her conservatory training into an active musical career and a significant impact on her community.16

1 “The Obituary” in A Service of Witness To The Resurrection Celebrating the Life Of “Princess” Grace Brown program, Greensboro, NC, August 26, 1993, 2. Accessed courtesy of Phylicia Fauntleroy Bowman.

5 Ibid, 5; “The Obituary” in A Service of Witness To The Resurrection Celebrating the Life Of “Princess” Grace Brown program, 2.

10 “The Obituary” in A Service of Witness To The Resurrection Celebrating the Life Of “Princess” Grace Brown program, 2; Phylicia Fauntleroy Bowman, “Phylicia Fauntleroy Bowman: Oral History Interview,” 8. Phylicia Bowman shared that in 1931, due to financial hardship during the Great Depression, her mother, at age 9, was sent to Greensboro and lived with Grace G. Brown for two years.

12 “The Obituary” in A Service of Witness To The Resurrection Celebrating the Life Of “Princess” Grace Brown, program, 2.