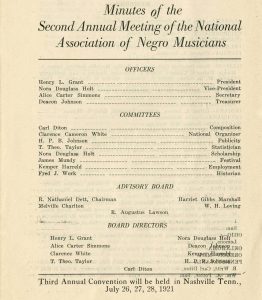 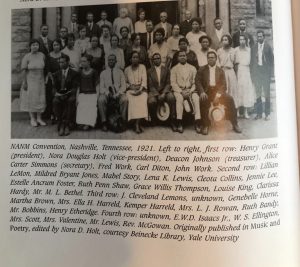 NANM was conceived as a fellowship network for Black classical musicians. As Doris McGinty points out in her unpublished manuscript on “Artists and NANM,” NANM was built upon pre-existing musical infrastructures created by Marshall, Emma Azalia Hackley, and others, “in a way NANM became an intensification of a process that had started many years before in 1919.”3 NANM was thus one manifestation of a broader phenomenon that Imani Perry has called “Black associationalism,” a trend that saw the proliferation of organizations across every area of civic and professional life.4 Such groups offered networking, political organizing, and business opportunities; they also conferred social status on participants, thus contributing to broader aspirations to racial uplift.5

Grant was not the only Washington Conservatory alumni involved in NANM. Other graduates including J. Cleveland Lemons and Daisy Westbrook served as regional chapter heads and conferences organizers in the early decades of NANM. Columbus-based piano teacher, J. Cleveland Lemons served as the president of the Columbus Branch of NANM from 1920 through the 1950s.6  Daisy O. Westbrook, served as the 1927 NANM convention secretary when the convention was held in St. Louis, MO. During the 1927 NANM convention, the Chicago Defender reported that Westbrook participated in a performance of “​​Vorspiele by Wagner-Singer and Tannhauser Overture for piano (16 hands).”7 Fellow Washington Conservatory graduate, Pearl C. Flipper (later Taylor), also participated in this performance.8 And Wilhelmina B. Patterson later served on the “The Hampton Institute Entertainment Committee for the Association of Negro Musicians Convention” in 1931.9 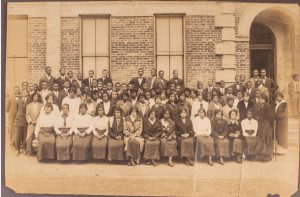 Group Portrait from the 1921 NANM Convention in Nashville, TN

4 Imani Perry, May We Forever Stand: A History of the Black National Anthem (Chapel Hill: University of North Carolina Press, 2018), 6.

14 More research would be needed to determine whether Marshall’s vision inspired similar efforts by later scholars, notably Eileen Southern and Samuel Floyd, Jr., to create Black music research centers like the Schomburg Center for Research in Black Culture at the New York Public Library and the Center for Black Music Research in Chicago.