This project began with a question: where was H. T. Burleigh performed, discussed, physically present, or otherwise influential during his lifetime? As a team, we had never studied Burleigh (some of us had never heard of him), neither had we studied early twentieth-century American music in any depth. Our starting place was Dr. Jean Snyder’s meticulous biography, Harry T. Burleigh: From the Spiritual to the Harlem Renaissance, and it gave us numerous paths into our research. Our group of 12 divided into smaller groups focusing on 1) Burleigh’s early life in Erie, 2) his career in New York, 3) his domestic performances and political touring, 4) his connections to and relevance within the Harlem Renaissance, and 5) the performances of his works by Marian Anderson, Roland Hayes, and Paul Robeson. Each group used similar but distinct sources and pursued some combination of the following research methodologies to collect an enormous amount of information on Burleigh’s life and legacies. You can access all of our data as Google Sheets here (in raw form) and here (subdivided into a larger number of topic-specific spreadsheets).

Our Sources and How We Used Them

Jean Snyder’s biography, Harry T. Burleigh: From the Spiritual to the Harlem Renaissance not only gave us ideas for topics to pursue, but also provided an important foundation of factual information. From the book, we were able to record many performances and life events, some of which had place names with addresses attached to them, whereas for others we had to go in search of a location in other sources. Snyder’s book also gave us other sources to look through for this information and more. 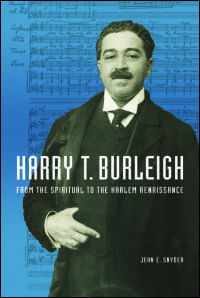 We also used several other, older biographies on Burleigh, as well as biographies on performers who sang Burleigh’s music frequently. These biographies generally served the same purpose. In our research of Paul Robeson and Roland Hayes, for example, the biographies The Undiscovered Paul Robeson: An Artist’s Journey, 1898-1939 by Paul Robeson Jr. and Christopher Brooks’ Roland Hayes: The Legacy of an American Tenor were both especially helpful in understanding these artists’ mentorship by Burleigh and tracking their performing careers. Of course, we consulted a number of books and other scholarly journals on other subjects that helped provide context, performances, and occasionally place information. Jean Snyder’s article “Harry T. Burleigh, ‘One of Erie’s Most Popular Church Singers’” in Black Music Research Journal was particularly useful for finding important events and places during Burleigh’s life in Erie. In compiling a list of people that Burleigh knew, Maud Cuney-Hare’s book, Negro Musicians and Their Music was extremely helpful, as was Samuel A. Floyd, Jr.’s “The Invisibility and Fame of Harry T. Burleigh: Retrospect and Prospect” in the Black Music Research Journal. Additionally, historical books provided crucial information for our research. For example, we were able to use directories and travel guides to find addresses for churches, performances venues and other halls whose locations have since changed. Benjamin Whitman’s Nelson’s Biographical Dictionary and Historical Reference Book of Erie County, Pennsylvania, published in 1896 was extremely useful for finding out information and addresses about places in Erie. Likewise, we used Lou Gody’s The WPA Guide to New York City to find places and addresses in New York City. Altogether, our initial research showed that while studies of Burleigh’s life and impact existed, they only scratched the surface of our question. To go deeper, we needed to dive into archival sources.

Each group relied heavily on archives with digitized historical newspapers and periodicals. We used these resources to find additional event details, such as where and when performances took place, that often went unmentioned in secondary sources (or that weren’t available when the first wave of Burleigh scholarship was being written). We often gathered a lot of information about whom Burleigh knew based on newspapers and information about house performances. Other information we derived from newspapers included names of performance venues, assisting artists, or repertoire performed. Newspapers occasionally printed errors, which we tried to correct by confirming dates and addresses through other sources.

Historical maps and images were one way to confirm or complicate information we found in newspapers and historical periodicals. Many times, we were able to use historical maps to figure out locations and addresses for places that no longer exist or have since moved. For example, by using ward and precinct maps of New York, we deduced the location and address of a restaurant called Delmonico’s, which had multiple locations over several different years. Historical pictures and maps, found mainly through databases like the David Rumsey collection, also aided our research by supplying more context. If a building address in question no longer exists, but the other buildings or landmarks around it in the historical picture do, we could use maps and street photography to compare descriptions of the original building and its surroundings with other records. By triangulating addresses and nearby landmarks, we could figure out where the original place was located. Below is an example of a 1901 map of New York (accessed via the David Rumsey collection) that we used to confirm addresses.

Google Maps, while not the same type of source as most of the others on this list, ended up being an important resource for compiling locations because we could use it to verify that the location we found made sense. We also occasionally used the street view to be certain that the building looked old enough or matched a historical picture we found if we were reasonably sure that the location had not changed addresses. We also could use Google maps to find latitude-longitude coordinates to go along with our addresses to make our data collection easier.

Some of our most prolific sources were the newspapers we obtained through digital archives. Because digital archives are searchable, we were able to find far more performances than we would have had we been flipping through physical pages or microfilm collections. As useful as these newspaper archives can be, they also presented some challenges and can skew the scope of our research. Newspapers in general are difficult sources to work with because the intended reader knows more than the researcher reading a hundred years after its publication. Things like the addresses of local venues and exact dates that a local reader would know can be difficult to pull out of a quick, paragraph-long article of a recent Burleigh performance.

Additionally, relying on digital newspaper databases inevitably skews our data because we have access to certain papers and not others, or only limited runs of other papers. We have access to large publications like the Chicago Defender, the New York Times, and the Los Angeles Sun, but not to smaller, local papers like the Erie Morning Dispatch. In searching for Burleigh abroad, it was difficult to find accounts of his tours because Burleigh refused press while abroad. Certainly, further performances will be found in other locations, such as physical collections or other digital archives to which our team does not yet have access. To view an entire list of the sources we used, consult our Bibliography.

In a research project such as this, the collection of data is just half the battle. As we quickly learned, unclean data is unusable data, and consistency across all spreadsheets is key. The decisions we made as a class and some of the lessons we learned along the way about data collection and mapmaking are detailed here.

For consistency, we decided to use Google Sheets for all of our data collection. While everyone had access to every sheet, some sheets experienced a lot more traffic than others as multiple research groups would find points to add in their own independent research. The more people submitting to a sheet, the messier it became as everyone was using different systems for dates, citations, and other columns. An early version of the “Performances of Burleigh Works 1900-1949” sheet provides a prime example of messy data collection.

Missing latitude/longitude pairs, missing dates, and varying citations all made for data that would not translate effectively into points on a map. As we began to wrap up our research, these unfinished rows needed to be scanned over one-by-one, cross-checked with their citations, and filled out. Small discrepancies with formatting like date needed to be standardized (YYYY-MM-DD) as each sheet was cleaned up. Are art songs written in italics or are they in quotes? Are concert spirituals any different? How are we going to format citations to make them easy to track back to the source? Is it HT Burleigh or H.T. Burleigh? When looking at international performances, should the country go in the state column, or should we make a separate column for it? All of these questions and more needed to be answered before our data could be entered into a map. See the list of our data sheets [below] to see the final results of our data standardization.

Missing Data and Other Challenges

As with any research, not all of our data was as detailed or complete as we would have preferred. With any discrepancies or unknown values, we still needed to find a way to represent the information that we did know for our maps while still acknowledging any uncertainty. When exact days were unknown, we used the first day of the known month. When months were unknown, we used the second of January of the known year (we learned the first of January was unreliable because of timezone differences) and accounted for all date uncertainties in our “Discrepancies” column.

Standardizing locations was another issue that we ran into with our data. Many of the concert halls, churches, and schools that we looked at have changed names or been torn down in the hundred years since Burleigh or his contemporaries performed there. Whenever possible, we used historically accurate addresses and names even when that information today might be different. Many of the researchers consulted historical real estate maps and browsed newspapers trying to track down specific addresses. Whenever an exact address could not be found, a point would either be placed in the city center (and noted in the “Notes” column) or the line would be moved to our “outtakes” sheet. These outtakes are all points that were not used in our final maps but are possible leads for further research.