The most recent challenge that has popped up in my Burleigh research is tracking down places where his compositions were performed abroad. Over the past week, I have been focusing on rounding out my Paul Robeson and Roland Hayes research, trying to fill in gaps of their domestic performances and branching out of New York and Boston to see where else they might have performed Burleigh’s works. In my most recent blog post, I discussed the bias that exists in the sources that I’ve been able to find so far in my research. Even though I’ve achieved a certain degree of success in finding concerts and interactions that connect great performers like Robeson and Hayes to Burleigh, these examples are mostly confined to the Boston and New York areas. Any outlier data points are like small nuggets of gold, and I’m still struggling to strike rich.

Newspapers in the United States have been the best sources of information for me so far in my work. Over 20 concerts connecting Burleigh and Robeson were found in clippings of the New York Times, the Chicago Defender, and a few other major newspapers. I could find a similar number for Roland Hayes too. Both of these prolific performers had long careers abroad though. Hayes made his name performing all over England and Western Europe, and Robeson travelled to almost every corner of the world throughout his life, giving concerts and speeches on political activism. Why have I not been able to find more information about these concerts in international papers? It turns out that I may have been looking in the wrong place all along.

My fellow group member, Izzy, introduced me to a database that she had found particularly useful for finding Marian Anderson’s concerts abroad. She had been using newspaperarchive.com to track down occasions where Anderson sang Burleigh outside of the US. I’m hoping to find a bit of success here as well. While this database is much more comprehensive than the others I’ve been working with, it is also much harder to use. The site only allows for very limited search specifications. To use this effectively so far, I’ve had to search for “Roland Hayes” in the main search bar and “Burleigh” in the must-be-included bar. 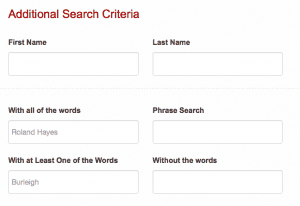 Because this database is so extensive, a more specific search like this still brings up about 3,000 results. I’ve found that the best way to scale these results down is to isolate a particular time period during which I know the performer was active and then further isolating the location in which I know they were performing. For example, if I know Roland Hayes spent a majority of the 1920s in London and a few other areas in Western Europe, I can scale down my search to only look for newspapers in London and the UK in that time period. Hopefully this method will be able to yield more results and allow me to find more ways to connect Burleigh with the most notable performers of his works.