Down the Rabbit-Hole, Don’t Stop Digging

In an attempt to better understand the life and impact of HT Burleigh, my group has decided to look at his influence through the lives of three of his most notable mentees and contemporaries: Paul Robeson, Marian Anderson, and Roland Hayes. Each of these influential vocalists had direct contact with Burleigh at some point in their lives, and they continued to seek his advice, sing his spiritual arrangements and art songs, and laud his work throughout their own careers. My initial focus has been solely on Paul Robeson. I’m fortunate enough that a significant amount of literature has been written on Paul Robeson, because of his fame as a football player, vocalist, actor, and political activist. I started by skimming and searching indexes of books about his life, pulling out Burleigh’s name wherever I could. Some of the best sources were The Undiscovered Paul Robeson, written by Paul Robeson Jr., his son; Paul Robeson Speaks, by Philip S. Foner; and Jean Snyder’s book, Harry T. Burleigh: From the Spiritual to the Harlem Renaissance.

From these initial sources, I was able to pull out some key connections between Burleigh and Robeson. In my group’s database, I entered in two notable speeches that Robeson gave that mentioned Burleigh and a few concerts that Robeson gave while under Burleigh’s instruction from 1924-25. When I turned to the internet to find more performances, the research got a bit more messy. I searched a series of newspaper databases with the separate search terms “Paul Robeson” and “Burleigh”, only within the years of 1920-1963 (around when Robeson started and stopped performing). The most successful database was Proquest’s Historical Newspapers, where I was able to find around 30 other documented performances where Robeson performed Burleigh’s spirituals from New York Times articles and a few other large newspapers. These types of primary sources provide valuable insight into Robeson’s individual performances and how successful Burleigh’s spirituals were at many of them. This article from the New York Times from 1929 tells us that Burleigh’s Deep River had to be performed twice at a sellout concert at Carnegie Hall! 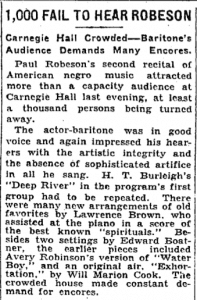 Although this database yielded the most results, I recognize that there is a bias in the major newspapers and my performance archives. Most of my performances are centered in New York, when I know that Robeson performed all around the country and world on various tours. This bias is apparent in a preliminary map that I created to visualize what my final map might look like and where my research has potential to expand.

Addressing this source bias is going to be the most difficult part of my own map-making. My map cannot be completely comprehensive because I will never know if I’ve been able to document every performance that Robeson gave of a Burleigh work. The way that I present my data in the map needs to acknowledge that. Noting that there are many concerts that Robeson gave in other places outside of just New York is important. My group will need to discuss ways to address any inconsistencies or gaps in data that might occur in our final map.

The biggest difficulty I face now is broadening my search horizons. It has been difficult finding sources that discuss Robeson’s times outside of the United States in any great detail. I think my next step is to start searching in particular places that I know Robeson travelled and see if I can find concert program archives or any news sources that talk about the performance that he gave while abroad. One of the most interesting primary sources that I stumbled upon by chance was a concert program of a Robeson performance in Topeka Kansas. He had given a concert at the same Municipal Hall seven years prior, and I was searching for the hall’s coordinates when this second performance made its way into my results. This reminds me that there is no end to the possible research that I can do. If a seemingly random search can bring up a new performance that connects Robeson and Burleigh, then how many other searches are there that could be just as fruitful? This type of data collection is a rabbit-hole of information, possible leads, and dead ends. As frustrating as it can be, every little success is a great motivator. My work is far from done, so I’ll just have to keep on digging.