A Mingling of Minds and Maps 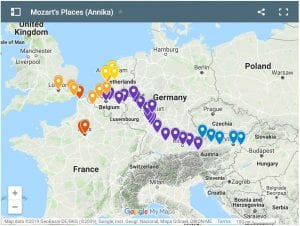 My individual map of Mozart’s travels.

After trying separately to fix Les Voyages de Mozart, Izzy and I got together to combine maps. We immediately realized that in trying to solve some of the problems of the original map, we created maps that looked almost nothing alike. Whereas I tried to follow the path of travel and create a data point for every town or city he passed through, Izzy choose to focus on the places where Mozart spent the longest amounts of time. As she choose to link pieces of music that Mozart worked on in each of the places, looking mainly at his longest stays where he wrote the most made sense. Because I was working with Leopold Mozart’s letters, as collected by Emily Anderson, it made more sense for me plot all the spots that he mentioned and then select some excerpts from those letters to paint a picture of what happened in each location.1 In a sense, we ended up starting with the same map and creating two contrasting maps which provided different information and were useful for different reasons. 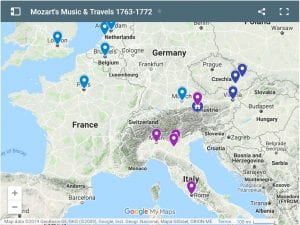 Izzy’s individual map. To see the full map (and hear the music!), you can visit her blog post and read about her mapping experience!

At first glance, we were uncertain whether we could put together our two maps because of these differences in style and content. Additionally, Izzy had picked the most important places from Mozart’s entire life, where I had simply started at the beginning and gotten as far as I could in the time I had. One of the steps in reconciling our maps therefore needed to be setting a consistent date range, which led us to choose to focus on the Mozart family grand tour. We then realized that putting our maps on top of each other as two layers on the same base map, made for an interesting composite map. On the composite map, the path of journey is clear as are the more important locations based on his duration of stay and the works composed there. Layering the maps also allows for our map to simultaneously function as all three maps in one.

One of the biggest lessons I learned from this mingling of maps was that everyone will probably bring different solutions to the table. After all, that’s why we’re doing this work as a team instead of trying to tackle it individually! As we continue working on trying to improve historical maps, we ought to problem solve both together and separately, because different people see problems and solutions differently.

It also turns out that different people see different problems as more and less important. Whereas my map addressed the problem of the original’s being simply a set of slightly confusing lines and dots on a map with no context, Izzy’s addressed the issue that there were maybe more points on the original map than were actually necessary. In maps, and in life, another set of eyes is very helpful in problem-solving and tough decision making. In the end, I think Izzy and I ended up with a combined map that we can both be reasonably proud of: