A Place to Start…

One summer, when I was maybe eleven years old, my friends and I decided to draw a map out of chalk that took up the entire street of the cul-de-sac so that we could use our razor scooters and bicycles on our drawn roads. Now, I’m a senior in college and I’m still finding a way to play with maps, although unfortunately sans scooter.

In her aptly titled chapter, “How to Play with Maps”, Bethany Nowviske discusses how as mapping moves into the digital humanities, it is often considered an end product, where it should probably be considered as just a piece of the process.1 Nowviske argues that playing with maps can be an important part of the humanistic tools of inquiry. Sometimes, mapping different information or changing what is shown can lead to new insights or understanding. 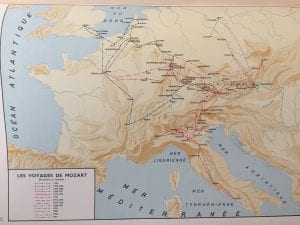 During my time attempting to create my first map for this project, I found that “playing” played an important role in the process.  For my project I was tasked with creating a slightly busy map from Atlas Historique de la Musique, that purports to show Mozart’s travels. I knew that I wanted to show his path more clearly, but I had to figure out how to do that most effectively. The original map’s routes are difficult to read because of the similar colors chosen and the sheer number. I also had to figure out how many actual places I wanted to include. In poring through letters from Leopold Mozart to confirm places, I discovered that the original map included some towns the family only passed through, while excluding some other cities where they spent at least the night. Which of these locations should I include?

Ultimately, what ended up being most helpful to me in resolving this quandary was to actually put down points and places on the map. By putting points on the map, I realized that I probably didn’t need lines after all. Simply plotting all the points made it easy to see the general direction of the trips, from far enough out. Clicking around also helped me decide to organize my data by year, instead of through trip groupings like the original map. I found that using colors for each year helped demonstrate the dual component of moving time and made directionality more immediately clear.

By the time I “finished” my map, I realized I probably hadn’t chosen the most efficient or direct way to create my map. But, I’m not convinced I wasted time either. Like Nowviske said, “playful methodology” can be an important process of discovery. Whereas it is doubtful I will probably ever need to know as much as I do about 18th century travel routes, I did learn important lessons through the process about my own decisions in map-making. To point back to another of Nowviske’s points, I now feel readier to embrace the biases and tensions of the medium. Let the mapping begin!

1 Bethany Nowviskie, “How to Play with Maps,” in Cultural Mapping and the Digital Sphere: Place and Space, ed. Ruth Panofsky and Kathleen Kellett (Edmonton: University of Alberta Press, 2015), 107-127.