The Casino de Paris is a beautiful music hall located in the northern half of Paris. The hall opened in 1890 and was extremely popular from the start. In fact, the hall is still open and is a major location for many big acts in Paris today (Of Monsters and Men and Alabama Shakes will both be performing there next month). 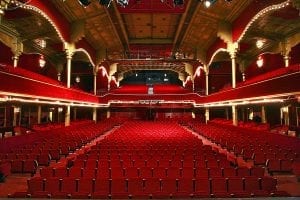 Inside the Casino de Paris, http://www.yoolabox.com/sites/default/files/activites/photos/casino_de_paris_1.jpg

So far, my research is proving to be very difficult for the Casino de Paris. The building was very popular and housed many important acts, such as Josephine Baker, but there is very little writing about the location itself. Most of my information is going to come from random reviews that talk about performances at the venue. There is very little writing describing the location itself or talking about its uses. I was able, however, to find an article in the New York Times of an American who went to the opening night. He describes the theater in great detail, noting that it can seat about 1,000 people with standing room for about 500. One thing that he mentions that I found particularly interesting is that the main attraction, be it a ballet or a musical act, was not the only reason to attend. Even during a ballet, there were variety shows going on in another room, and people would also be either in the hall or at the bar throughout the entire show.

I have barely begun finding all of the options for research so far, and I think that my most useful sources will be descriptions of actual performances at the location. Because there are very little resources with sections actually on the Casino de Paris, it is exciting to know that my research is very relevant and actually contributing in some way to musicology.