My current research revolves around the Société Musicale Indépendante (SMI), a progressive musical organization founded chiefly by Maurice Ravel in opposition to Vincent d’Indy’s reactionary leadership of the Société Nationale de Musique (SN). My most immediate challenge has become increasingly apparent in the past few days: I do not speak French. (Yes, I created my title for this post with Google Translate’s help.) Many of the dissertations, research papers, or articles that have been written about the Société Musicale Indépendente are in French; of these, many are published in the Revue de Musicologie by the Société Française de Musicologie. At first, I shied away from these documents, not wanting to spend all my time trying to work with them. However, their titles – which I can partially understand – are just too good to pass up.

Titles such as Michel Duchesneau’s “La musique française pendant la Guerre 1914-1918: Autour de la tentative de fusion de la Société Nationale de Musique et de la Société Musicale Indépendante” make just enough sense to me.  Using a dictionary, I am able to understand that the title refers to the attempted merging of the two societies. Visions in my head are conjured of heated debates, strained relations, and fragile conversations. Perhaps these ideas are a bit dramatic, but even based solely on a rough title translation, they seem to fit.  Surely, any attempt to find common ground between groups whose nationalistic ideologies differed – and whose views may have been perceived as threats to each other – could not have been simple or peaceful. Still, I need to be able to draw more than this broad conclusion out of the document. I’m worried that I will miss the nuances and specificities that I am accustomed to gleaning from word choices in English. Luckily, several of my FLAC classmates have offered to help me read and translate the documents.

Relationships are my second great challenge with my SMI research; fortunately, relationships are also the most exciting part. During the past few days, I have been reminded continually of how much like a treasure hunt or like detective work a research project can be. Many of my initial English-language “finds” for the SMI were actually papers referencing a lack of information in comparison to the SN. I found this odd – the SMI seems important. However, as I thought more, I realized I had found a clue.  If historical documents fail to mention the SMI, focusing instead on the SN, it may be a testimony to the pervasive French nationalism at the time and to the SMI’s misalignment with this nationalism. 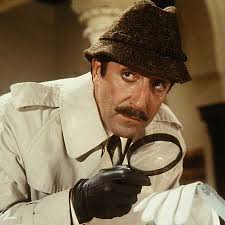 Finding seemingly different pieces of information, then connecting them back to a common source, makes me feel like a detective. A French detective. Like Inspector Clouseau.
Source: http://www.timeout.com/newyork/film/our-50-favorite-film-fools

I realized that it would be more helpful to start at the ends of the web with the SN itself, and with different individuals who opposed its new direction under d’Indy.  From there, I could work my way inward from different points back toward the center, the SMI.  This web-like process has proved challenging and time-consuming, yet fruitful and exciting. For example, reading about Maurice Ravel and his rejection of d’Indy’s SN led me to read about Nadia Boulanger’s relationship with the SMI, which in turn illuminated the differences between the two societies.  Footnotes also prove rewarding, with references suggesting where else to look.  Thinking in terms of a web has helped me greatly: switching my mindset from topic as starting point to topic as end goal has expanded both the breadth and the depth of my research.