In A Room with a View, E.M. Forster’s beloved 1908 novel, the young British protagonist Lucy Honeychurch religiously clutches her Baedeker travel guide as she explores the Italian city of Santa Croce. The tactless and comical Miss Lavish believes herself to be more adventurous than other British tourists and tells Lucy: “Tut, tut! Miss Lucy! I hope we shall soon emancipate you from Baedeker. He does but touch the surface of things.” The fatherly Mr. Emerson, however, sympathizes with Lucy after Miss Lavish snatches her travel guide: “It’s worth minding, the loss of a Baedeker” (Pt. 1, Ch. 2).

Forster gently mocks English tourism, a growing industry, in A Room with a View. Coincidentally a fuller critique comes from his greatest masterpiece, A Passage to India, (about, no surprise, British tourists in India) which he published in 1924 (yep, 1924). This anecdote, although unrelated to Paris and music, at least draws our attention to the massive presence of European tourism in this year. Increased air and land transportation technology lowered prices and made travel safe and practical for most middle to upper-class citizens. (See Phillip’s post of the London-Paris air route for more info.) The mentality about travel changed as well, as the war ended and sent home a new generation of men who were used to traveling across Europe on short notice.

Politically, the world was recognizing this growing industry as well. 1924 was one year before the first attempt by world powers to regulate tourism, through the founding the International Congress of Official Tourism Traffic Associations, the precursor to the World Tourism Organization.

Tourism brought in huge amounts of revenue, and lots of individuals and groups were jumping on the bandwagon to take advantage of this. One such group were those who formed and wrote for tourism guide companies, such as the Baedeker company mentioned by Forster. German publisher, Karl Baedeker, first started producing “baedekers” in 1827, and they grew in popularity over the years. By the early 1900s, they were evidently well-known enough to be mentioned in a popular novel without any explanation besides a name.

Let me pause for a second so you can ask why I am telling you any of this. When trying to find and confirm addresses for our map, we turned to a 1924 Paris edition of a Baedeker and became overwhelmed with the abundance of information it provided for our project. So far we’ve looked at a 1924 editions in French, a 1937 edition in English, a 1923 edition in German, and another similar 1924 English guide, called a Blue Guide, by a different publisher. 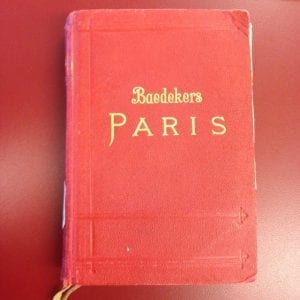 This German-language 1923 Baedeker provided us a great starting point when confirming street addresses.

The descriptions in the travel guides are designed specifically for outsiders. In a way, you could say they are dumbed-down or simplified (possibly why Forster includes his comical description), but really they are aimed at a specific audience—they are for tourists, not locals, and include similar categories and similar informational descriptions as you might see today in a Rick Steves guide. The Paris guides we looked at contain, for example, lists of hotels, restaurants, and attractions and contain sections on the right bank and left bank of Paris and individual neighborhoods within them. They are also, much to our delight, full of maps (!!) of popular tourist destinations such as the Louvre and Versailles as well as practical info such as train maps or places to find telephones or postal services. 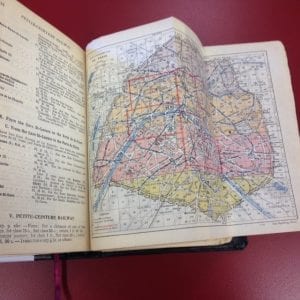 The appendix of this 1924 Blue Guide is filled with fold-out maps of popular destinations in Paris.

It even contains cultural notes. For example, the Blue Guide talks about “forms of politeness” that are “more ceremonious in France than in Great Britain or America,” such as doffing one’s hat in “restaurants or cafes”(xxxi).

These tourist manuals, although not a typical scholarly source of information, have provided us great insight into what it would have been like to step into Paris in 1924 from an outsider’s perspective. I’d even go as far as to say it’s much of the same perspective one is in when looking at a map…

Forster, E.M., A Room with a View. Online-literature.com.