One member of our team spent three days transcribing the performance listings in Le Figaro for January 1, 1924. He produced dozens of entries related to theatrical productions that may or may not have made use of incidental music (more likely not), as well as another dozen or so entries specifically related to music. Mapping the musical entries alone produces the following map:

Listings in Le Figaro from January 1

Now, click the layers button at the top left of the map (looks like Layers Button), scroll down, and check the boxes next to “Revues and Variétés,” “Theatre,” and “Cirques.” Below the last layer, you should see a tiny grey triangle pointing up; click this to disappear the layers list. Your new map should look like this: 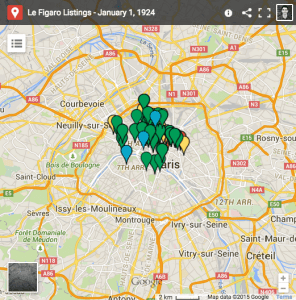 Map of all January 1 listings from Le Figaro

While our intention has always been to produce interdisciplinary maps that acknowledge the wide range of musical and other sonic production in Parisian culture, in this map we lose the forest for the trees. Collecting this data and making this map convinced us to exclude theatrical performances that did not obviously include music (incidental or otherwise). We were also reminded of an important (if somewhat obvious) fact: while musicological scholarship portrays music as occupying the central position in Parisian cultural life, the market for music was arguably much smaller than was the theater market.