1st of December, 1924. Yesterday I had the unique sensation of going to a concert by the Concerts Colonne at the Théâtre du Châtelet1. The program comprised of Berlioz’s Symphony Fantastique, a classic, Khamma by Debussy, Tzigane by Ravel, a Parisian premier as well as Orchestral premier, and la Péri by Paul Dukas2. The program was absolutely astounding bar one thing; Tzigane. My problem with it is that it is going against the current of contemporary French artistry by unraveling the post-romantic line and writing in the style of a late-romantic violin concerto, as well as questionable influences of Gypsy culture.

I must first admit my mistake of deciding to attend such a concert. The Société des Concerts held a conservative concert as per usual. Beethoven’s 5th Symphony, Grieg’s Piano Concerto in A Minor, Respighi’s Fountains of Rome, Symphonic Poem for Piano and Orchestra by Pierné, and Wagner’s The Maister Singers. All around a good program but I was hoping for something a little more tantalizing. The Concerts Lamoureux gave another conservative concert, performing Schumann’s Symphony in B flat, Mozart’s Concerto for Piano in E flat, Bourrée Fantastique by Chabrier, Trois Mélodies by Fauré, The sorcerer’s apprentice by Dukas and finally a world premier, L’Offrande lyrique by Jean Cras3. I must admit, I was tempted by the strangeness of the word, Tzigane, as it’s not one you find in common parlance. I must further admit that Cras doesn’t necessarily impress me as a composer, whereas Ravel has had my respect for many years. I think it would be easy for anyone to see that such a decision was a simple one.

As the lights dimmed, I could barely contain my excitement for what surely was to be a spectacular program. Symphonie Fantastique was astounding as ever, with the idée fixe resounding in my heart forevermore, and Khamma was interesting as well. Finally, what I had come to hear was about to begin. Jelly d’Aranyi4 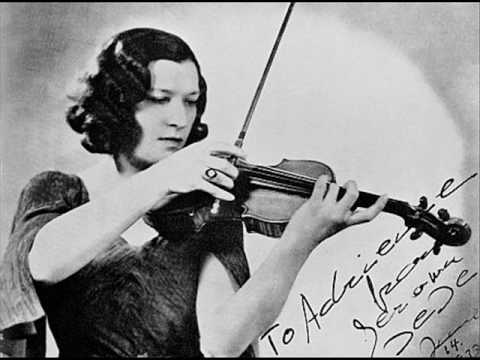 walked on stage, centered herself, and settled her bow in the string. Tzigane starts with a sweeping cadenza, exhibiting many virtuosities of tone, fast passages, terrifying harmonics, double stops and then all that in octaves. I was caught up in the moment, d’Aranyi’s furious fingers bounced up and down the fingerboard in a fiery blitz of passion. She then enters an ethereal duet with the harp going both everywhere and nowhere at the same time. Just when you thought you’ve had enough trilling chords she launches into the meat of the piece, a rondo. The rondo theme comes back, denser and more impressive with every spin. The use of harmonics, left hand pizzicato, and especially fast arpeggios with both is fascinating to watch as d’Aranyi bolts across the fingerboard with the daring and precision of an English Sniper. The piece ends with some mildly unimpressive chords, sucking the drama away from the atmosphere. D’Aranyi’s performance was nothing but spectacular. I heard a friend of hers in the audience mention that she only had four days to prepare it, four!

One thing that dragged the performance was the blatant neo-romanticism in which Ravel wrote. Many aspects of Tzigane exhibit similar characteristics of the late romantic violin concertos, such as Mendelssohn, Dvorak, Sarasate, and Sibelius. Just offhand comparing Sibelius to Tzigane, there are lots of fast arpeggios, grandeur double and triple stops that are non-functional, a lyric melody followed by intense virtuosity almost immediately and use of many virtuosic bowings (Such as ricochet and sautillé.) D’Aranyi exhibited all of these in such brilliance, which in it’s own right was astounding. Unfortunately the drama of the entire thing was slightly unsettling, 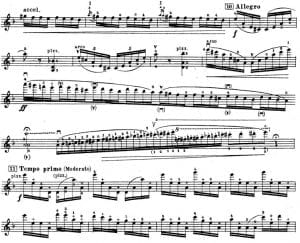 I thought we had done away with romantic notions as we came to our senses of French ideals in the 20th century. Evidently not. (Could use a source somewhere…)

Another aspect that I found startling was Ravel’s readiness to appropriate5 from Gypsy culture. Why not Spain, or China, or, like every other French composer, Jazz? The inspiration evidently comes from d’Aranyi staying up till some 5 in the morning6 to please Ravel’s ear with her Gypsy tunes on her violin, something I also overheard from the friend of d’Aranyi. The problem is not in Gypsy music itself, it’s that its influence goes counter to the French style and considering many exalt Ravel as the most prominent French composer alive7 then perhaps he should continue writing forward instead of backward. French music is very defined and planned, whereas Gypsy music has very little meter and is very improvisational. Some would argue that Jazz is improvisational yet clearly so many French composers have succumbed to is deadly masquerade. The problem with that argument is that French composers have taken elements of Jazz and exclude the improvisatory material. Ravel, as clearly shown, has written a 3-minute cadenza (I indeed timed it!) that is clearly out of any sense of musical time. That or d’Aranyi is terrible at keeping proper rhythm which is highly doubtful. Another issue I had is that if I wanted to hear Gypsy music, I’d go listen to a Gypsy composer, not a Gypsy rip-off. Even as close as Ravel could have gotten to Gypsy music, it still would not be authentic Gypsy music. Regardless of Ravel’s intentions, Tzigane will always be a representational instead of an authentic work8.

Tzigane should have been premiered 30 or more years ago at least. It does not fit in with modern Frenchness of definedness, exhibiting qualities of romantic violin concerti and appropriating from a culture that is the opposite of what French music should be.

5 “In some of his later compositions Ravel becomes more deeply involved in exoticism, with his gypsy-inspired Tzigane (1924) and the minimalistic Bolero (1928). A spectacular example is his three Chansons Madécasses of 1926…” Page 52. Leydon, Rebecca. The exotic Music of Les Baxter and Yma Sumac, Widening the Horizon: Exoticism in Post-war Popular Music.1999.

7 Zank, Stephen. Maurice Ravel: A Guide to Research. New York: Routledge, 2005. Print. No page given. “In the years following Debussy’s death Ravel was gradually, grudgingly recognized as the preeminent surviving French composer of the twentieth century…”

8 Locke R. Doing the Impossible: On the Musically Exotic. Journal Of Musicological Research [serial online]. October 2008;27(4):334-358. Available from: EBSCO MegaFILE, Ipswich, MA. Accessed November 25, 2015 “Generalization and idealization had been a central principle of the aesthetics of representational art ever since the Greeks, a process that involved the filtering out a variety of incidental details in order to focus on the central features that conveyed the essence – and spiritual message – of the object or person being depicted.” Pg. 344