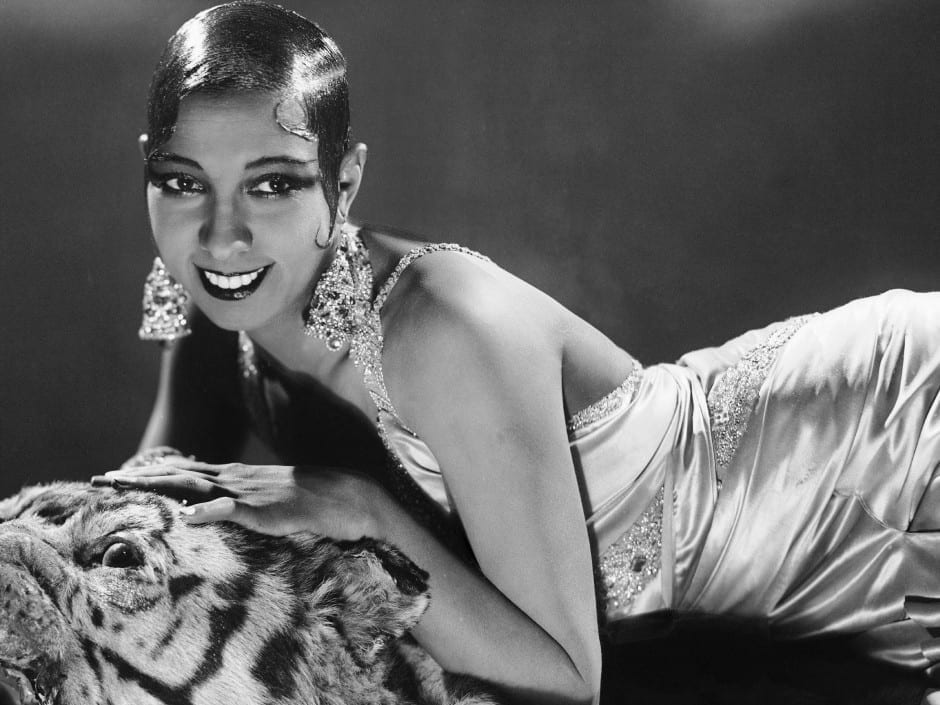 Harlem, Paris, and Beyond

This map explores the travels of Sidney Bechet, a jazz saxophonist and clarinetist, and Josephine Baker, a singer and music-hall star, during the 1920s. Both of these individuals were American performers who gained success during the Harlem Renaissance, and then traveled internationally as Europe became fascinated with jazz and with Black American culture. Their impacts on jazz music, the entertainment industry, and the performing arts remain visible today. The story of jazz in Europe begins with the first World War, which saw American ragtime bands such as James Reese Europe’s Infantry “Hellfighters” Band come to France in order to entertain troops and civilians. After the war, many American musicians and troops elected to stay in France rather than return to the U.S. Similar groups such as the Original Dixieland Jazz Band made headlines in London. During this time, elements of Black American culture from music to dance found a home in the theaters, music-halls, and cabarets of Europe. These spaces were subject to the exoticized, primitivist expectations of their usually-white audiences, and by today’s standards the fixation upon jazz, the Charleston or Baker’s nude dancing smacks of appropriation and racism.The best-known example of this trend of “negrophilia” was the 1925 variety show entitled La Revue Nègre: a show which, not coincidentally, also marks a term of significant overlap in the lives of Baker and Bechet. To explore this application in a fullscreen view, click here.

This project began when I revisited some of the data and source material about jazz and music-hall performances in Paris during the 1920s that I compiled last summer. At first, I just wanted to tie up lose ends- although I finished a jazz venues map, I still had a lot of event data and pictures from specific performances that hadn’t been incorporated into any finished product. I first envisioned using this data to make a chronological pin-drop map, similar to the ones this team has created in the past. In this kind of map, a user can watch dots representing specific performances appear and disappear over time. However, this kind of chronological display doesn’t allow much room for exploration by the user, and it limits the implementation of other features that I felt were more significant for this map. Right away, I knew that my priority for this project was including as much descriptive or embedded media as possible. This lead me to a focus on individuals with well-documented performance histories and thus, Josephine Baker and Sidney Bechet. Rather than treating my data just as information to be quantitatively analyzed, this map is explicitly narrative. It draws heavily on biographical accounts on the two figures, and in that sense the experience of using the map is akin to reading sections of a biography. Most traditional biographies are very heavily text-based; they shunt images, newspaper clippings, videos, and archival photographs to the bibliography or, if you’re lucky, to five pages of printed images stuck haphazardly in the middle. The digital sphere allows us to go beyond these typical representations of history, and doing just that has been my overarching goal throughout this process. Integrating biographical text with media and with spatial visualization allows users- particularly students and the general public- to become invested in the stories of the past more quickly and more personally. In addition to providing this more qualitative historical experience, mapping biographical data spatially can reveal or emphasize aspects of history that one might not otherwise consider. For example, both Sidney Bechet and Josephine Baker are closely associated with the American expatriate community in Paris during the 1920s, yet one glance at the map shows that they spent just as much time in dozens of other countries as they did in France. Thus, visualization tools such as this one can lead us to question the assumptions that we tend to make about the spaces we consider to be historically “significant.”

This application is a StoryMap “Tour,” and as the name implies it is designed to host a kind of photo-based “journey” throughout time and space. This format works well for the project, since it deals with the travel and movement of individuals. The split-screen format foregrounds the embedded media, rather than limiting it to thumbnail sizes in pop-ups as some other platforms do. StoryMaps is a much more user-friendly application than other exhibit-display platforms such as Omeka; the process of uploading images and adding events is intuitive and accessible even for the least computer-savvy among us. This simplicity comes with some limitations, such as the fact that all text formatting must be done in HTML. Additionally, when I originally formatted my data, I had the date, location, photo caption, and text description all in separate categories. When I uploaded my CSV into StoryMaps, I ended up having to edit my text descriptions to include date and location information, since there aren’t different sections for extra types of information in StoryMaps. In general, however, the capabilities of the platform and the goals of the project are well-aligned.

Jules-Rosette, Bennetta. Josephine Baker in Art and Life: the Icon and the Image, Champaign: University of Illinois Press, 2007.