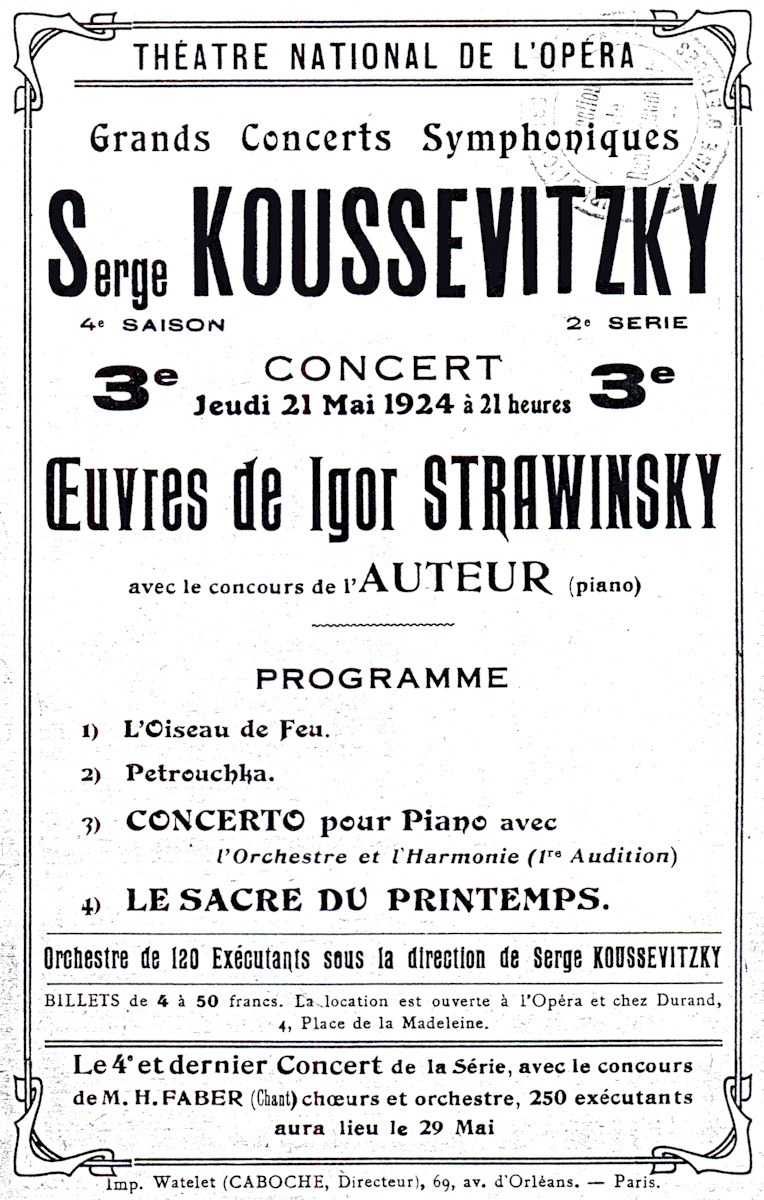 (The concert program mistakenly puts 21 May 1924 as concert date. The concert actually took place on the 22nd at the Theatre National de l’Opera)

The night of May 22nd in Paris was, as usual, vivid and full of artistic enjoyment. Alfred Cortot, one of the finest pianists in our era,  gave a solo piano recital of Romantic masterpieces, including a long list of Chopin’s music [1]. The movie Notre Dame de Paris is playing in Salle Marivaux [2]. A long-term supporter of Concerts Koussevitzky series and Russian music, I undoubtedly chose to attend the concert at the Theatre National de l’Opera [3].

Several months ago, the conductor Koussevitzky and his orchestra gave the Parisian premiere of Prokofiev’s Piano Concerto No.2, a great composition of both modernism and Russian lyricism that was received positively by the Parisian critics, including myself [4]. Following his Russian contemporary, Stravinsky premiered his Concerto for Piano and Wind Instruments on the 22nd and played the piano part himself. I have separate opinions and evaluations for the performance and the composition of this premiere: while Stravinsky’s piano performance was unexpectedly and miraculously marvelous, the actual work does not share the same brilliance and feels too colorless [5].

This is the first time I have ever seen Stravinsky premiering his own piece on the piano. Stravinsky himself probably had realized the rare chance that he performs as pianist and appeared to be very nervous and serious. The intensity Stravinsky experienced throughout the whole performance was fully shown to the audience by his gestures and the fact that he placed the orchestral score next to him on the bench [6][7]. I completely understand Stravinsky’s stage fright. While Stravinsky has established his name as a composer with a series of significant works such as Petrushka and The Rite of Spring; Stravinsky as a pianist has barely appeared in past concert programs. I heard that it was the conductor Sergei Koussevitzky who brought up the idea of playing the piano to Stravinsky. Stravinsky hesitated but obviously accepted the idea in the end [8].

Yet I would not speak any less of Stravinsky’s performance because of his obvious stage fright. The overall performance was magnificent and really carried me away [9]. Stravinsky’s playing was enthusiastic, solid, strong and powerful, similar characteristics to a lot of his music. His timbre was hard, cold and hammered [10]. His rhythm was accurate and moved forward relentlessly. Not only his music, but also his playing gesture, presented the objectivity of Neoclassicism: I feel like I was riding on a train or some industrial machine of some sort when listening to him. The heavy chordal passages on the piano reminded me of his writing in Three Movements from Petrushka, in which the piano was used primarily as percussion [11]. The restless running lines of octaves, thirds, arpeggios and scales — passages that require high level of pianistic skills of clean attack and strong fingers — resemble some of the driest and most difficult Czerny etudes [12]. The concerto presents such highly demanding passages and challenges for a pianist! No wonder Stravinsky was nervous and had stage fright!

While I am simply amazed by Stravinsky’s piano playing and can only think of all the good words to describe the excitement and joy his playing evoked, I feel less convinced to speak as highly of the actual composition. This concerto follows the Neoclassicist footsteps of his Octet and Histoire du soldat. Stravinsky’s resolution to continue his Neoclassical practice is clearly represented by the use of dotted rhythm, the solemn French overture gesture at the beginning of the piece, the toccata spirit in some movements, the use of winds (and only winds!), and the contrapuntal fugal lines between instruments throughout the whole composition. All these musical elements come from the tradition of Bach, Handel, Vivaldi, and Scarlatti [13][14][15].

These interesting musical references and well-composed details in the concerto did not give more color, spirit and soul to the composition [16]. It would be unfair to claim that the work has little lyricism, but it does not represent  romanticism at all, which might be completely intentional by the composer [17]. The composition is a full picture of objectivity and coldness. To describe it metaphorically, it is a painting of only one single color (probably dark blue or grey, to my imagination), or a piece of large stone sculpture with little imagery — something humongous, stiff and not intimate. The objective character of Stravinsky’s Neoclassicism really stood out when the rest of the concert was comprised of all his old works written in the Russian style, which he has since abandoned [18]. In contrast to Petrushka and The Rite of Spring, the two pieces with such vibrancy and brilliance performed that night respectively before and after the concerto, his new work seems purely dry and colorless.

Overall, I would consider the May 22nd performance a successful premiere of Stravinsky’s Concerto for Piano and Wind Instruments, mainly thanks to Stravinsky’s demonstrated pianism and musical engagement. The actual composition of colorless Neoclassicism, however, did not fit my aesthetics and taste of music.

[5] Stravinsky’s Concerto received different commentary after its premiere and divided the critics. This fictional concert review takes the positive side for the premiere performance but the negative side for the actual composition, a stand shared by Prokofiev, Ditta Pasztory (Bartok’s second wife) and some Hungarian reviewers after its Budapest premiere in 1926.

[7] Stravinsky recalled his performance and described that he was “unable to remember how the slow movement started until the conductor hummed him the opening notes”. Stephen Walsh argues, however, that this narrative of Stravinsky was “probably an anecdotal recollection of some general anxiety, since it is not borne out in detail by contemporary reports”. This argument is supported by the lack of such report in Prokofiev’s letter. See Stephen Walsh, Stravinsky: A Creative Spring: Russia and France, 1882-1934 (New York: Alfred A. Knopf, 1999), 389.

[8] “…I ought to say that the idea of playing my Concerto myself was suggested by Koussevitsky, who happened to be at Biarritz when I was finishing the composition. I hesitated at first, fearing that I should not have time to perfect my technique as a pianist, to practice enough, and to acquire the endurance necessary to execute a work demanding sustained effort”, spoken from Stravinsky. Charles M. Joseph, Stravinsky and the Piano (Ann Arbor, Mich.: UMI Research Press, 1983), 160.

[9] In Bartok’s second wife Ditta Pasztory’s letter, she writes after attending Stravinsky’s concert in Budapest on March 15th 1926, that “I can say that the whole thing, as it is, really carries one away. Stravinsky is a magnificent genius, and we very, very much enjoyed the evening…”. David Schneider, “Bartók and Stravinsky: Respect, Competition, Influence, and the Hungarian Reaction to Modernism in the 1920s,” in Bartók and His World (Princeton: Princeton University Press, 1995), 184.

[10] See David Schneider, “Bartók and Stravinsky,” 184 for “bare rhythm, bare hammering, bare some-kind-of-timbre” and Daniel Lazarus, “At the Olympic Games,” in Modern Music 1924: Forecast from Paris, 31 for “the hammered tone of the piano”.

[12] Stravinsky admired Czerny as “a remarkable teacher” and “a thoroughbred musician”. During his performance preparation for the concerto premiere, he practiced Czerny and received lessons from Isidore Philipp. Joseph, Stravinsky and the Piano, 160-161.

[15] “Stravinsky’s piano concerto is done in the style of Bach and Handel…“, see Prokofiev, Selected Letters, 253.

[16] “Stravinsky’s playing was bare rhythm, without color, spirit, and soul”, written in one Hungarian review after Stravinsky’s concerto performance in Budapest. David Schneider, “Bartók and Stravinsky,” 185.

[18] See concert program on the second page for concert order.

Lourie, Arthur. Sergei Koussevitzky and His Epoch: A Biographical Chronicle. 1931.

Schneider, David. “Bartók and Stravinsky: Respect, Competition, Influence, and the Hungarian Reaction to Modernism in the 1920s.” In Bartók and His World. Princeton: Princeton University Press, 1995.