From Stravinsky to Diaghilev, on Bronislava Nijinska

To my dear Vaclav Nijinsky,

I pray that this letter finds you well. I am writing on the occasion of the recent death of our dear colleague Sergei Diaghilev;1 it seems that this event has stirred in me a certain nostalgia for the collaborations in which we all participated together,2 and I ask your forgiveness for my forwardness in this letter. My aim in writing is to communicate to you a truth that I have come to believe quite passionately in recent years, over and against the claims of many critics,3 that your sister, Bronislava Nijinska, is a brilliant choreographer and dancer, and has taken up the legacy of your work and expanded upon it in astounding ways. Her contributions to the world of dance are nearly indisputable, but I will argue that her work has also impacted and enlivened the music of the ballets – especially of my Les Noces and La Renard – which she has choreographed since our first collaboration nine years ago.4 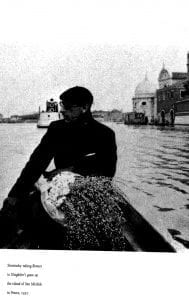 Stravinsky brings flowers to the grave of Diaghilev

To begin, I must express my gratitude to you for the sheer innovation you brought to the world of dance: your choreography of my Le Sacre du Printemps signaled the advent of an entirely new style, and in my conversations with Bronislava I have discovered that she is in agreement: at that hectic premier of Le Sacre, we (and Diaghilev!) knew that you had singlehandedly transformed the notion of the relationship between movement and music.5 The traditional interpretations of beauty and grace had in that moment evaporated before our eyes, then precipitating into a new choreographic style in which angularity and starkness took the place of fluidity and excess. It is my sincerest conviction that the work of your sister not only built upon that foundation but continued the work of transformation:6 as an example, in her choreography of my Les Noces, the aerial jump from your choreography of Le Sacre is taken to new heights as the dancers repeat that motion over and over again,7 brilliantly evoking a kind of incessant angularity. 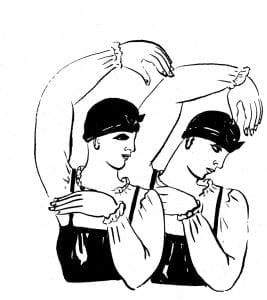 Pencil drawing by Natalia Goncharova of dancers from Les Noces

I believe that the impact of your sister’s work upon my music is most evident in her work with La Renard and Les Noces. As I read the stories of Afanasyev and set them to music for Le Renard,8 I sought to reach to the very depths of the Russian folk tradition and grew increasingly anxious for an adept choreographic interpretation of my unconventional work. Thankfully, Bronislava’s brilliant work did justice to the folkloric humor of the piece. I only recently discovered that a portion of her childhood experience contributed so greatly to the acrobatic movement of the choreography of Le Renard, when your sister revealed that after a trip to the circus, the two of you became enraptured by the movement of the circus acrobats, attempting to replicate their movements over and over again until they had become so engrained in your bodies that they made reappearances later in her choreographic career.9 It is this whimsical spirit, unique to the work of Bronislava, that captured the vein of satire10 I wished to convey in my music.

It was not, however, until the 1923 premier11 of Les Noces that I truly understood the genius of your sister’s continuance of your choreographic legacy. In the opening scene of the work, I was thrilled to find that the juxtaposition of the still bodies of the dancers with their momentary outbursts of leg movement fit perfectly into my vision for the visual component of the music.12 As the performance continued, my sense of appreciation for dear Bronislava was magnified as I observed the way she continually situated the dancers in two symmetrical groups, reflecting clearly the angular musical architecture of the piece. I simply fell in love with the combination of classical pointe, evoking Russian folk dance, with entirely new and unexpected outbursts, reflecting the crucial rhythmic elements of the music. It was in the choreography of Le Noces that I believe Bronislava Nijinska asserted herself as a new force of artistic genius.

In the past weeks, perhaps as an aftereffect of the nostalgia caused by Diaghilev’s passing, I have contemplated further the genius of Bronislava’s work, and have realized some of the subtlety of her work with Les Noces that was unapparent to me at the time of the premier. Aside from the particular technicalities of the dancers’ movements onstage, the overall tone set by the dancers throughout the work was one that reinforced a particularly progressive narrative of femininity. The piece is, of course, a portrayal of a wedding; one might expect a certain air of joy and abandon on the part of the dancers, especially of the dancer portraying the bride. Bronislava, however, turned that expectation on its head, calling for the costume designer to scrap the original costume design for new drab outfits in dark colors, and creating a choreography that evokes heaviness rather than delight in the sacrament of marriage.13 In Bronislava’s version of Les Noces, the bride does not appear particularly happy to be betrothed, and the jagged movements of the dancers onstage serve to reinforce an idea of the marriage as the woman’s obligation, rather than a true joy. These interpretive choices strike me now as not only radical but also revelatory, reflecting the kind of assertiveness only Bronislava possesses.

I hope, my friend, that my assertions have served to remind you of the importance of the work of you and your sister in the life of my music. Diaghilev and his Ballets Russes left an indelible mark on the cultural world of Paris in the past decades, and it is with a heavy heart that I contemplate Sergei’s passing this week. When I, like many critics of the time, did not understand the importance of the work of your sister in the early years of our collaboration, it was Diaghilev himself who encouraged me to wait and see what she would produce.14 This prophetic call to appreciation proved itself to be well founded as I came to greatly admire her choreography of my La Renard and Les Noces. Indeed, Bronislava Nijinska inherited a wealth of innovation and novelty in your work with the Ballets Russes, and in her own work adapted and revolutionized those techniques in a way that transformed both dance and music. In closing, I thank you once again for the work that you continue to do, and I pray blessings on the rest of your career.

2 Vaclav Nijinsky, The Diary of Vaclav Nijinsky, trans. Romola Nijinsky (Berkely, CA: University of California Press, 1936), 39. Nijinsky makes clear that Stravinsky and Diaghilev worked well together and thought fondly towards one another, at least in the beginning of their relationship.

6 Ibid., 469. This is a paraphrased quote from Nijinska herself.