I’ve spent considerable time going through programs of La Société des Concerts du Conservatoire, and I feel especially drawn toward this orchestra as a possible avenue to perform some of my compositions. I tend to write using non-functional harmonies, inspired by traditional forms. Some would argue that the era for that has passed, but I disregard them as some modern chauvinist. This orchestra has a history of performing conservative repertoire, both standard and contemporary, while other Parisian orchestras do not participate in the same tradition, tending to perform premiers of modernist composers. That is why I believe the Society to be the best platform in which to premier my neo-classicist works.

Over the course of the decade, I have collected many, if not all of the programs of La Société

des Concerts du Conservatoire. I found many interesting trends that point towards a single point, the Society tends to perform conservative works and doesn’t explore other areas of music. A general trend I noted was the tendency to play one of three things: 1. A Beethoven Symphony 2. A Wagner Overture or 3. Rimsky-Korsakov’s Scheherazade. Not much branching out at all. However, you will find that there has been a steady increase in the number of unique French composers performed. However, it must be pointed out that graph A (Nationalities)2 points out unique composers, not number of compositions played so there is a very specific increase of unique French composers. 1920-1924 shows an average of 22 unique French composers per year while 1925-1929 have an average of 27 French composers. 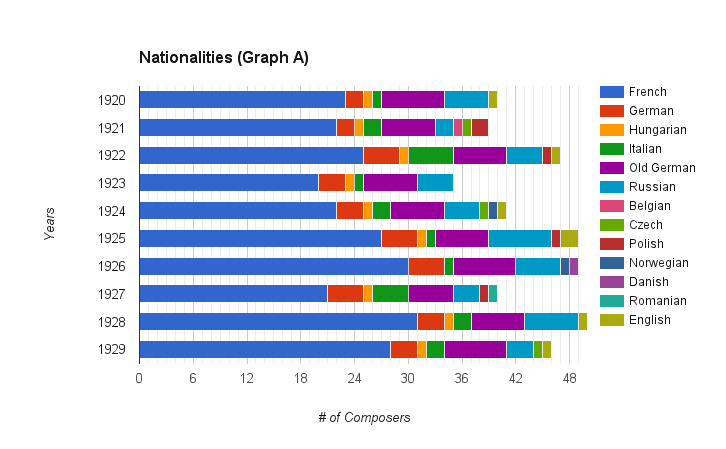 However that graph doesn’t take into account the number of compositions played per composer. Thankfully, Graph B (Composer Performances) does just this. Here we see a different story. Beethoven and Wagner are the most performed composers. Beethoven was played an average of 15 times per year, Wagner, 12. While a lot of scholarly articles are written in aim to deface German/Wagnerian music, I think it goes without saying that the Society’s performances generally reflect public interest, otherwise they would have gone under from lack of ticket sales. 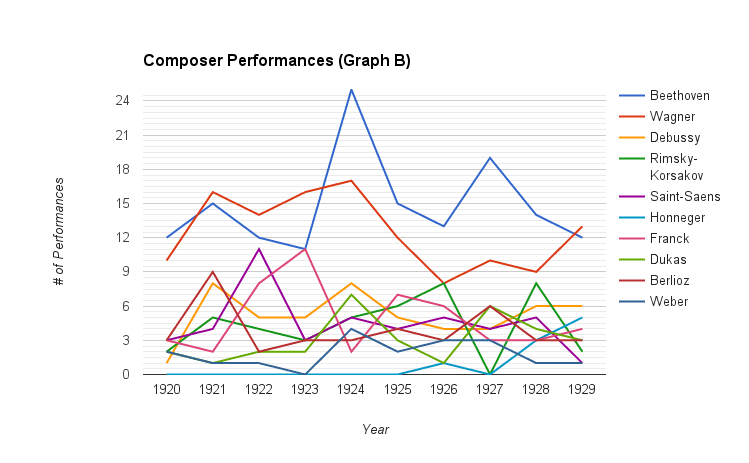 But they also reflect the decisions of the conductor as a programmer, those made by yourself. Your “selections of programming for the society reflected the high value [he] placed in the music of the classics and the neo-classicists”3. In other words, you are not very sympathetic to the modernist cause. Nor should you be, as the orchestra you conduct has had a history of playing conservative repertoire. As Paul Bertrand notes in Le Ménestrel in the paper a while ago, “Faithful to an unchangeable tradition, the Société des Concerts has only just started to take part in the musical movement which has been going full steam for a long time”4 We must protect this tradition at all costs, however if we continue to perform the same music over and over again, the Society will grow stagnant and uninteresting. As someone who writes from this long standing tradition, I feel that my scores would be most appropriate for this ensemble to revive interest and keep the fervor alive!

The general trend of Paris the previous decade has been towards performing new works. Here is a chart of premier/first performances during the 1927/28 season of various Parisian orchestras5. Here we see an astonishing difference in the Conservatoire in regards to contemporary orchestras in how adventurous they are for new pieces. What’s interesting is how grave the difference is. Out of 41 concerts, 4-6 pieces played on each, only one was something the orchestra hadn’t previously played. That new thing was Bach’s Wedding Cantata, not a new work. While it’s not definite what exactly the other orchestras played, considering the vast difference in first performances compared to the Conservatoire, it’s safe to say at least some had to be premier performances. 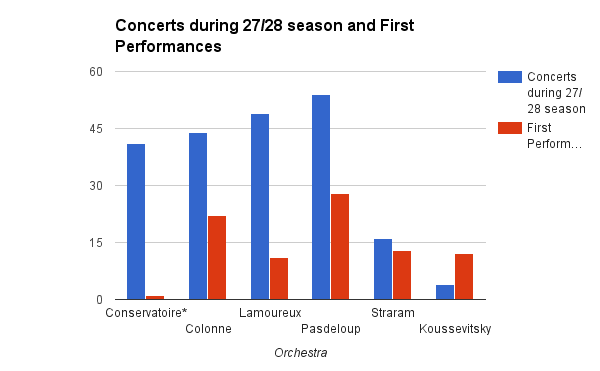 I would posit that it would be beneficial to the Society to perform new works to increase their audience. Considering the Society’s conservative nature, I would also posit that my pieces would mesh well with the rest of the repertoire performed! You can have the best of both worlds; new compositions while maintaining the expected status quo of brilliant, traditional music!

We have already established that the Society performs music that doesn’t deviate very far from the norm. In fact its constituents, according to a review, “preserve its educative role, [and] prefers to lend itself to hallowed works, by Bach, Haydn, Mozart, Beethoven, [and] Schumann”6. This in large part is coming from yourself, Gaubert, which is in deep contrast to other orchestras. Pierne of Les concerts Colonne “remained open to most of the new music [in Paris]”7. This is to say, they performed many more Parisian premiers than other orchestras, specifically the Society. As for Les Concerts Lamoureux, one season they performed Beethoven and Wagner “but all the music in the preceding twenty concerts was French, by men like Ropartz, Aubert, Caplet, and d’Indy”8 Then you might consider Les Concerts Pasdeloup, however I would kindly disregard any recommendation given to this orchestra. For one, the conductor Rhené-Baton “was nothing very special as a conductor” and even Milaud himself stated “The Pasdeloup Orchestra, Paris’ worst”9. No, La Société des Concerts du Conservatoire must be the orchestra to perform my works, if at all.

This orchestra is steeped in traditional values and performances, carried by its conductor, performers, and constituents. But in order to compete with the other orchestras and maintain your dominance in the field, perhaps performing new works would increase the audience you could entertain. You could use my works, as a start.