Fictional Memo from Louis Veuillot about the Folies-Bergère

It has been brought to the attention of the Société de la Musique Francophone[1] that there is interest in holding the organization’s 100-year anniversary at the Folies-Bergère, located in the 9th arrondissement of Paris. The Folies-Bergère would be a careless choice of location for an institution of any repute. Those who are attracted to the idea of gathering at the Folies-Bergère, should consider the social and moral repercussions of associating with such a sordid establishment. Despite the allure of an elite and exciting social scene at the Folies-Bergère, it would be inappropriate to hold a gathering there because the institution demonstrates purely hedonistic ideals that are neither truly artistic nor French. We must not overlook the Folies’ culture of prostitution, overtly sexual performances and blatant exoticism.

The social crowd found at the Folies may seem attractive, but they should not be because they are associating with low-class people. The culture at the Folies-Bergère demonstrates a society that is explicitly concerned with social status. For its reputation as a low-class institution, the Folies attracts many men and women from the middle and upper class.[2] It can be exciting to attend a revue there simply because of the other socialites that will probably be attending as well. This is the only reason I can imagine The Figaro would consider a performance there to be an “enchanting spectacle”[3]. They were clearly enthralled by the social scene and unable to recognize which performances are simply not enchanting. To even be associated with these people can seem like an encouragement to one’s own social status. However, we should not be fooled by this thinking. Wealthy men and women who attend performances at the Folies-Bergère are slumming in a culture to which they cannot fully relate. They find it exciting to commune with the people, and enjoy being a part of a different way of life. It is considered a ‘smart’ social habit.[4] Despite the fondness with which we may look upon our socially-elite peers who attend performances at the Folies, we should really be asking ourselves if we want to associate with those of us who waste time communing with the lower claases.

Besides the appearance of the socially-elite, supporters of an event at the Folies point to the array of artists there. It may seem fashionable to associate with artists at the Folies-Bergère, but it is unwise to associate with artists because they represent a politically dissident subculture. The revues have been cited as sources of inspiration for countless artists, including the famous Edouard Manet.  Manet created his painting, ‘A Bar at the Folies Bergère” from his experiences there. [5] It is not surprising that this is so. In one night, one might hear a mélange of odd tunes, popular song phrases, striking costumes and current events. These ideas may seem interesting, but what they represent is troublesome. Amidst these ‘inspirations’ is an underlying opposition to government. I do not think it safe to present morally ambiguous art at a time when artistic expression is being regulated. There is often talk of police spies at these performances, who I’m sure would be ready to take action against questionable artistic work.[6] This is only the beginning of the numerous ways this institution is unsuitable for a gathering of our repute.

Perhaps those who proposed this location were unaware of the history of prostitution that pervades it. The barmaids at the Folies have been historically considered to be part of a behind-the-scenes sex scene. Beautiful women are obviously used as lure in order to profit financially, with such benefits as increasing alcohol sales.[7] Manet alludes to the internal desperation many of these women face in their positions. Many of the barmaids that work at the Folies are struggling actresses or otherwise trying to make a career in Paris. Manet portrays the emotional complexity of Suzon, a performer at the Folies. Unlike the expected forthcoming nature of a prostitute, Manet captures a disturbing aloofness in the woman’s face. 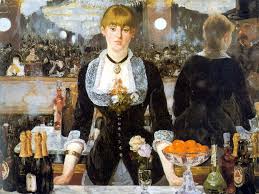 I imagine these women do not feel fulfilled in their role. Recently, prostitution has become slightly monitored because of some violent acts here, yet that does not seem to take away from the fact that the institution was built upon these repulsive morals. Additionally, greater regulation of the underlying prostitution scene has only increased the prevalence of nudity on-stage.

Greater amounts of nudity and racier performances should be an important factor in helping us determine that this venue is inappropriate for our more sophisticated needs and higher moral standards. Nudeness is a factor that particularly distinguished the revue from other performances like cabaret acts or operettas. This began in 1863 when decrees opened theater construction to anyone who had the finances and who could observe basic building codes. Construction of café-concert houses like the Folies boomed and with it came great freedom in performance.[8] A series of legal battles complicated what women were expected to wear on stage. By the time Paul Derval took over management of the Folies-Bergère in 1918, he perpetuated the institutions sexual image to an even greater extent than before. Beyond provocative language, gestures, and nude-colored clothing, this new promiscuity is even more drastic.[9] The glamour and burlesque once associated with the Folies has been replaced with nudeness which is considered by some to be ‘artful’.

The outrageous and scandalous performances at the Folies-Bergère should not be considered ‘art’. Yet, some seem to believe that it can be found here. People have spoken about the Folies’ “living pictures” that reproduce classical paintings in performance.[10] However, these are so rare and distastefully done that it hardly seems correct to consider them a part of what makes this establishment artful. Even Americans visitors are shocked when they see these performances. According to the American newspaper, The Plain Dealer, audience-members were appalled when they saw their own Nina Payne in such promiscuity that they left part-way through the performance. This newspaper asked the question ‘Is this art?”[11] While the revues at the Folies-Bergère offer spectacle and a change from the concert-hall scene, in no way should overt sexuality be considered ‘artful’.

We can further discuss the artistic integrity of the Folies-Bergère by noticing the race performances that occur there which are not truly French. I am troubled to see such a disregard for ‘Frenchness’.The music hall has historically been used to provide an image of Paris as internationalist and multi-dimensional. This is concerning at a time when French nationality is increasingly important.  By integrating Negro women like Josephine Baker, they are showing their interest in this American jazz music which is not purely French. Baker famously performed La Folie du Jour at this institution about a year ago. It was inundated with Americanized African style. She wore a banana skirt and danced exotically.[12] 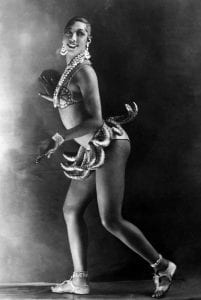 Women are interested in Josephine and try to be like her to be fashion-forward. They imitate her slicked-down hairstyle by using a product called “Barberfix”.[13] It is dangerous for women to desire to be like Baker, who does not represent true Frenchness. It would be more appropriate to hold this event at an institution that values the simplicity and clarity of French music.

The Folies-Bergère is not an appropriate place to associate with as an organization of our repute. It may seem exciting to go there because of social elites and artists that are often there, but there are numerous reasons we must look deeper. The history of prostitution, and the racy stage performances that are in conflict with true ‘art’ and ‘Frenchness’ are only a few of the reasons it would not serve us well to be associated with such an organization. I propose a more conservative location that would represent our values better. We must only be linked to institutions that are high class and know what true art is, for the good of all of the members.

Thank you for your consideration on this topic,

[1] This is a fictional organization that has been created for the purposes of this paper. In this context, it should be considered a wealthy, socially and politically conservative organization that is concerned with purity of French art.