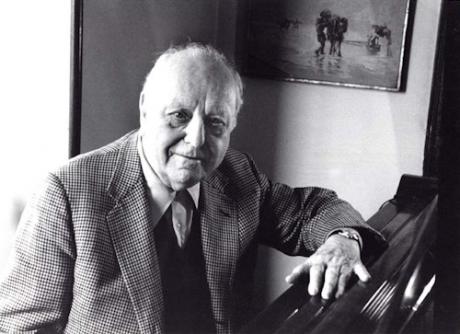 Virgil Thomson at a piano. What a joke. Photo taken from publicbroadcasting.net

I hope this letter finds you in warm regards. We briefly talked last December at Mme Lambert’s Gala about M. Virgil Thomson. You mentioned wanting to write an article about his successes in an attempt to make the Parisian papers seemingly less hostile to American artists.

I had quite the chuckle when you remarked about how many papers said American artists tend to buy in regards to their Parisian equivalents. As you may have remembered, I attend many of these concert gala’s in an attempt to support the new wave of music that floods Paris. One such Gala I heard his work, found him and his work so boring that I had to dig deeper to see if there was any depth to the man. What I found was more of the same, putting an article about him on the front page would set the level for mediocrity exceptionally low and invite a degenerate breed of hopefuls from New York and Hartford hoping to make it big in Paris.

A simple read in the daily paper asserts my point, Thompson’s compositions are nothing special. Perhaps you have seen this review by Paul LeFlem in the music column of Comoedia regarding Thomson’s La Sonate l’Eglise, a hefty piece written with a strange instrumentation.

The church sonata of M. Virgil Thomson  … written for clarinet, trumpet, viola, horn, and trombone, shows that the composer is not afraid to tackle a formidable combination of timbres. The instruments have appeared at times to overwhelm his courage and abilities. The parodying intention is evident in the middle of the Tango where a small facetious clarinet, lost in the shrill, arouses the good mood of the audience. M. Thomson has not ensured the balance of his style, if we judge by the Chorale at the beginning which is predominated by the feeling of forgotten flats or naturals. Whereas the more chastened final Fugue appears more scholastic and conventional1.

M. LeFlem is a  noted critic and is a trustworthy one. One of his pupils is our very own Erik Satie, whose music not only exudes French design, but embraces and shapes it through and through! I would think that he knows music when he sees it. Clearly Thompson has no idea what music will capture the public ear. Why here is another review in similar taste written by M. Lacloche of La Revue Politique et Littéraire. According to Lacloch, Thomson’s Sonata de Chiesa is

…divided into three sections; the first is the Choral, which is rational. Why is the second called Tango? Although the pace is indeed an intended effect, the title seems an irreverent cry out to the public. And I must say that this piece starting in a classical shape and rising in an increasingly shrill and squeaking crescendo that seems endless, there is great risk in extending it an instant longer that would prove serious to the nerves of the listeners… 2

What’s worse is the blindness that Mr. Thomson follows in regards to his own writing. Evidently the rough reviews didn’t settle his view, as he wrote to his dear friend Briggs Buchanan, one of his closest friends, a false review, one that he thought fit his premier more than that of M. LeFlem or M. Lacloche’s. Thomson himself told my good friend M. Roumage what he wrote, and it goes something like this, roughly. ‘The instrumentation was a great success. Each movement was incredibly strong, the public invariably, or ought to, awaits Mr. Thomson’s next work’3. Do you really want your paper enabling this ego-laden being? Is he really in the dark so much that he can’t fathom the idea of a poor review? What’s happening here is a disconnect with the public. He proudly states that the public “ought to” await his next work, the Symphony on a Hymn Tune. However, I heard he completed that during 1928 and has yet to come up with an offer to perform it 4. I highly doubt that an orchestra, such as the ones of caliber we have here in Paris, would perform such a piece.

My next point is this; in order to have influence on artists surrounding you, you must bring a unique feature that hasn’t been done before. You may very well argue that both time, location, and privilege are important variables to the receptiveness of a composer, and while I would generally agree, I would also respond that the culture of Paris during and around the 1920s was receptive to an unimaginable amount of new and interesting music and performers. Lest you forget the riots after M. Stravinsky premiered his Le Sacre du Printemps, we are in an era of unparalleled French expression. M. Satie writes with a flavour de vie that is evident in all his writings, Parade, Embryons desséchés, Sports et Divertissements, etc. While many of his pieces are satirical in nature, they still hold the essence of Frenchness. Many composers have been influenced by his works. I would presently argue that M. Thomson does not bring anything new to the table. Carol Oja explains “Contradictory behavior characterized Thomson and his music throughout his career…”5His style, while modern, is representative of a collection of influences from others’ work, not his own imagination. He remarked, again, to my friend M. Roumage that in 1927 he was at a loss to describe his style6. He found what he was trying to describe in Dadaism, the inklings of surrealism7, which explored the idea of psychic escape. Dadaists “felt the irresistible urge to go back beyond the horses of the Parthenon to the rocking horses of their childhood. For their very name they chose the French infant prattle term for that toy.”8 Furthermore, M. Thomson states

The Dada principles were simply that all is convention, that all conventions have equal value (or none), and that an artist is therefore free to work in (or invent, if he can) any convention whatsoever that may please him…I loved the climate of it, its high, thin, anti-establishment air.9

The important thing to note here is that his excursion into Dadaism is M. Thomson still trying to find his compositional voice. It goes without saying that a person such as M. Thomson could not have been influential without having some hook to his music that set him apart from the probable thousands of other composers in Paris. His pieces include an unregulated neotonality that is not uncommon in this day and age. The organization of his works make little sense. I reluctantly include this newspaper clipping, as I cannot identify the author. I wish I could verify its exact integrity, however to be in print of an established newspaper such as Le Temps, the main source of news for many of us Parisians, would have to speak for something of the character of the writer.

The wave of modern art reached its pinnacle in Hartford, Connecticut with an opera: Four Saints in Three Acts, music by M. Virgil Thomson to a libretto by Miss Gertrude Stein. It wasn’t a criticism to analyze it, because nobody has been able to understand anything nor has even attempted. They heard the words without any logic and no one could even guess what it was.10

This is M. Thomson’s supposed “big success.” Perhaps this composer’s hook is misunderstood text. It would be silly to argue that such a piece, whose libretto is indecisive at times, and the mysterious final act of this opera, is a successful addition to the repertoire. M. Thompson has worked Miss Stein’s text into other works, no doubt enjoying the process to which she also enjoys. But outside of this circle, the text is hard to understand and the music daresay rarely reflects it, “Which is a fact.”11 Four Saints did not enjoy a Parisian premiere, and we should all be thankful for that.

Another interesting fact about M. Thomson is his vacancy during the established period. He was on tour with the Harvard Glee Club during 1921 to 1922, in which he fell in love with Paris, establishing his longing for this land. His academic pension ran out so he unfortunately was forced to return to the States. However he found a Juliard Scholarship in 1925 and was able to return to Paris and remains here presently. This long academic leave really begs the question why he might be considered an important Parisian-American composer when he wasn’t even in Europe for a third of that time. This poses an even more important question, one that is generally harder to answer; what qualifies as an adequate amount of time for a person to be considered an influential composer to a region? This is a large question, and one not readily answered by this letter. However, in the interim, I would conjecture that M. Thomson did not spend an adequate amount of time in Paris during the 20s to have a stronghold support system similar to that of Koussevitzky, Copland or Stravinsky.

Thompson hasn’t really had a favorable review, nor was his time in Paris long enough to consider him a Parisian composer. However, here and there in his writing, especially his reviews, I see a spark of musicality. I would venture to say that in 10-15 years his career would be much uplifted compared to that of it now. M. Thomson certainly had a place in 20s Paris, but I don’t believe it is important enough to run an article on.

3 Excerpt taken from Virgil Thomson’s autobiography, wittingly titled Virgil Thomson. First edition, page 80. Full quote “In general one may say that leaving out about two ill-advised experiments, the instrumentation is unquestionably a knockout. The chorale has a genuinely new idea. The other movements decently satisfactory. The faults are a dangerous rigidity of rhythmic texture in the chorale, an excessively contrapuntal style in the fugue, and an immature comprehension of the profundities of classical form. The work manifests, however, a mind of great strength and originality. The public awaits (or ought to) with eagerness Mr. Thomson’s next work, a symphony in the form of variations on an American hymn tune.”

4  Symphony on a Hymn Tune was premiered on February 22, 1945 by the New York Philharmonic-Symphony. Tommasini, Composer on the Aisle. Page 156.