Jane Bathori, Champion of the Avant-Garde

How are you doing? How is everything going? I am sorry I have not written in a while. I have been so busy. I was going through some of my old boxes of papers and things from a few years back, and found programs from the Théâtre du Vieux-Colombier concert series from 1917-1919! It is bizarre to think back to ten years ago, the war was interrupting everyone’s lives and everyone’s music. That concert series certainly kept us all on our toes and thriving even during a tough time. I do not know if I ever really told you the details of that concert series, what it did for me, and also what it did for the formation of Les Six. If not, I will tell you now. It was all because of the extraordinary mezzo-soprano, teacher, mentor, and musician, Jane Bathori. Without Jane’s driving passion for promoting new music, my music, and other composers’ creations, we would not have been heard, especially during wartime. Furthermore, Les Six’s careers would not have been launched.

When Jean Cocteau turned Vieux-Colombier over to Jane, it was truly a stroke of luck. Jane took over the concerts with gusto. Jean was more interested in straight theatre[2], but Jane was ALL about the music. She was the producer, the director, she sang, she played, she accompanied herself! I included a couple of programs with this letter so you can see. There were two premiers at the concert on December 11th, one by Auric and one by Durey! I remember Auric even gave Satie a little “homage” during that concert, who then had his own “Vieux sequins et vieilles cuirasses,” played. The entire concert that day was made up of avant-garde music.[3] This concert is just one of many examples of Jane Bathori’s effectiveness in shining light on new composers and French music. She kept new music thriving and spirits alive during the difficult wartime. During her concerts, she would include patriotic hymns and songs next to all of our brand new stuff, creating beautiful experiences for her audiences each concert.[4] She allowed composers to be heard.

Besides composers being heard, she initiated careers and compositions. Les Six might have never been formed without her. Without Jane’s concerts, who knows where people like Auric and I could have been played during wartime! A beautiful thing Jane said once was “I was truly attracted to the modern musicians and for me it has always been the greatest joy to learn contemporary works: I feel that they are very close to my taste, to my understanding, and to my possibilities… I have always felt that one has not the right to ignore the works of one’s time, literary as well as musical,” [5] Her work ethic was and still is unbelievable. Unlike Cocteau, she was called to helping musicians. I know Satie saw Jane as an integral part of Les Nouveaux Jeunes because of all she did for them; I hope she is proud of what she did! It was through connections at the concert series that we eventually formed Les Six![6] It was a development that changed the course of my career.

Yes, you might say that Cocteau was the one first directing and promoting Les Six, but he quickly turned away from us and towards straight theatre.[7] He did good work getting us started, but it was Jane who let us fly. I found another program from January 15th, 1918, one of the earliest concerts to bond the future Les Six! [8] How exciting to see. Every Les Six member was on that concert except Milhaud. Cocteau cannot say that he promoted our music, fostered friendship and bonding, or inspired compositions to occur, but Jane can![9] She premiered our works and in turn had works dedicated to her.[10] Once at the Théâtre du Vieux-Colombier, Honegger premiered a play that she encouraged and produced. I believe it was le Dit des Jeux du Monde. He would not have undertaken such a project without her being her, being Jane. 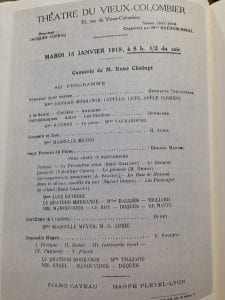 Jane Bathori was truly a gift to us young and struggling composers during that time. She gave us all roots to grow during wartime, when we thought no opportunities would even exist. She was not only a mentor and worker, but also an artist and musician. Milhaud himself described her as a singer “with such a pure style, clear diction, and discreet, interior charm…[playing] the subtle and aristocratic sonorities at the piano with such ease.” 7 Oh that Jane Bathori! Though Jane’s singing voice is not necessarily the most beautiful, wow, is she an artist! [11] I have heard people say things like “She is French song incarnate!” She is a brilliant musician, intelligent, artistic, and sensitive. [12]She sings “Six Chansons Francaises” by Les Six’s own Tailleferre so wonderfully![13]

Thank you for allowing your old friend to reminisce about an amazing woman. I hope you enjoyed learning about Jane’s legacy as the person who was an advocate for new composers and activated Les Six. I will finish with something I once said that really sums Jane up in a simple phrase; “ ‘Dear Jane Bathori, what hasn’t she done for modern music!’ ” [14]