Dancing a Fine Line: Exoticism in Milhaud’s “Saudades do Brasil”

The dance suite is a seemingly timeless genre of Western music, easily reaching back well into the Baroque and perhaps even earlier. Although we can see dance suites (or dance suite-like music) well into the 19th century in works by composers such a Chopin or Liszt, the genre had its heyday in the 17th century with Bach and Lully. Why, then, would one discuss dance suites in the context of 20th-century music? Milhaud’s dance suite Saudades do Brasil is a much later example of the genre, and the composer’s intention to write a dance suite based on Brazilian music leads to fascinating conclusions. Saudades do Brasil is an attempt by Milhaud to exoticize Brazilian culture while simultaneously conflating it with French and other “Latin” cultures, all wrapped up in a Baroque genre that circumvents German Romanticism.

During the Third Republic, French musicians became increasingly interested in proving the value of French music to the world, and especially to German and Austrian music producers and consumers. After losing the war in 1870 and suffering greatly at the hands of the Germans during the First World War, many French artists held a stark, dichotomous view of the world wherein either something is simple, elegant, fresh, and Latin, or it is complicated, awkward, stale, and Germanic. For some, these divisions ended with language. For Darius Milhaud, however, the line could be drawn around the entire globe. He refers to himself in his autobiography as not French, but rather “Latin” or “Mediterranean” – the implication here being that all “Latins” and “Mediterraneans” are effectively the same, and that it is the Germanic that is directly opposed to these groups. In the most expanded sense, one could throw French, Italian, Spanish, and Portuguese speakers all under the same umbrella in this way. By making use of this worldview, Milhaud could claim that all of these cultures are essentially one vast cultural group opposed to the threat of German music – and that he was free to use anything from any of these cultures in his works. This is only emphasized if one looks at the history of French exoticiztion: James Parakilas claims that the French have attempted to exoticize their fellow Catholic Latin nations to distance themselves from countries considered backward or behind-the-times by competing Protestant Germanic powers.[1] And yet Milhaud insists not on pushing away these Latin traditions from outside France, but rather on incorporating them into French music. This would imply, then, that Milhaud is not using exoticism to divide France from, in this case, Brazil, but rather to subordinate Brazilian and other Latin cultures beneath the French.

Having traveled to Brazil in 1917-1918, Milhaud became very familiar with certain aspects of the country. In his autobiography, he describes spending time in Rio de Janeiro and traveling occasionally to the countryside. He recounts how he became fascinated by the rhythms found in Brazilian popular music: “There was an imperceptible pause in the syncopation, a careless catch in the breath, a slight hiatus that I found very difficult to grasp. So I bought a lot of maxixes and tangos and tried to play them with their syncopated rhythms.”[2] Here Milhaud brings up the maxixe, a dance which Chris McGowan and Ricardo Pessanha credit as “the first original Brazilian urban dance.”[3] Milhaud fell in love with the maxixe in particular, which is characterized by a fast 2/4 time signature and syncopation that is “swung” in its own way. He mentions little at all else about his experiences of popular music in Brazil, but it is safe to say that this was not a unique situation, and that he likely had other run-ins and experiments with the indigenous popular music.

That Milhaud used his familiarity of Brazilian music in his own composition, then, comes as no surprise. After returning from Brazil, he composed the dance suite Saudades do Brasil, which he remarks was “inspired by South American rhythms and not based on folk music.”[4] While it is curious that he is explicit about the music not being based on folk music, the more significant key here is that the suite is based on South American rhythms. And rhythmic it is: every piece contains a particular rhythmic ostinato, almost always in the left hand. Take, for example, the opening bars of the second movement, “Botafogo.”

The left hand ostinato figure (three groupings of dotted eighth note-sixteenth note followed by two eighth notes) continues throughout the entire piece, interrupted only twice at cadence points. Each of the twelve pieces in the suite is constructed like this, where there is a dominant rhythmic motive that may switch hands or cede the way for another rhythmic motive, but the dominant rhythm always returns. Just like the dance music Milhaud encountered while in Brazil, Saudades is founded on overlapping rhythmic patterns. These can be as simple as seen above in Botafogo, and as complex as here, in “Ipanema.” 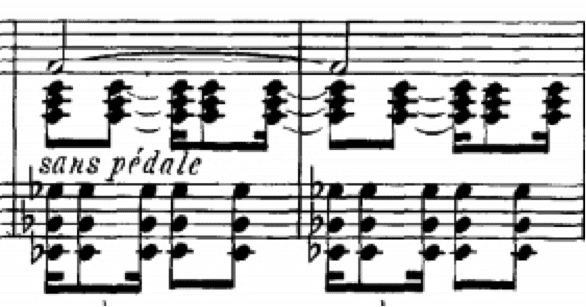 Here, the hands trade off playing either sixteenth-eighth-sixteenth syncopation or eighth notes. The ties in the right hand over the strong beats and the high pedal point complicate the pattern even further. Another connection between Saudades and “real” Brazilian dance music is that they share a 2/4 meter – every one of the twelve movements is in 2/4.

The connections to Baroque music, unlike Brazilian popular music, are more generic and formal rather than rhythmic. First, the work is a dance suite – as previously mentioned, a hallmark of the Baroque. Second, this is a collection of twelve short pieces for solo piano (with optional orchestra). The number seems to refer to works such as Bach’s Well-Tempered Clavier, which explores every key. Here, Milhaud seems to write each movement in a new key; the reception of this is impeded, however, by his polytonality, making it difficult to distinguish what key the piece is in, or even if it is in only one key at a time. These factors both seem to indicate Milhaud’s interest in pointing back to the Baroque as a source of inspiration.

And so, on the note of inspiration the question must be posed: while Saudades do Brasil was clearly inspired by Brazilian rhythms encountered during Milhaud’s time in the country, is the work an authentic representation of the type of music one can find there, or is it an outsider’s botched take on an art form he cannot truly understand in his position as outsider? Milhaud does include rhythms that one finds in Brazilian dance, and in his autobiography he makes note of a Brazilian composer of Maxixe, Ernesto Nazareth, who would “play piano at the door of a cinema on the Avenida Rio Branco” and whose playing style “gave [Milhaud] deeper insight into the Brazilian soul.”[5] So the performance of this dance music on piano, presumably without dancers, seems to be an authentic experience. All the same, Milhaud himself is not Brazilian, and is not part of the Afro-Brazilian culture that gave rise to this music, much as he would like to claim that he is related to the culture closely enough through the distant child tongues of a centuries-dead empire. In addition, Milhaud chose to title each movement of Saudades after a region in or near Rio de Janeiro, a choice implying that each piece is representative of a geographical location. This presented to an audience of French music consumers living in Europe weakens the argument for authenticity, as one of the keys of exoticization is oversimplified representation of a group or area on the part of an outsider in a form understandable to fellow outsiders – here, this means a dance suite of twelve pieces in different keys. While Milhaud’s aim was a unification of Latin cultures through subordination beneath France, his ultimate product was an inauthentic, exoticized attempt at recreating the music of a foreign country.

Parakilas, James. “How Spain Got a Soul.” In The Exotic in Western Music, edited by Jonathan Bellman, 137-193. Boston: Northeastern University Press, 1998.