Last month, I decided to take my troupe to the Moulin Rouge. We played there for four nights, and I was certainly disappointed with the outcomes. Women there are not treated with the smallest scrap of respect, as they certainly should be. My musicians and I were extremely uncomfortable with the place, and I felt personally offended. I will warn every woman who expects to be taken seriously to stay away from le Moulin; at least until they learn how to treat their performers with dignity. The institution is a stain on the face of Paris. Le Moulin Rouge is a sexist institution who uses women for the sole purpose of exploiting their sexuality. 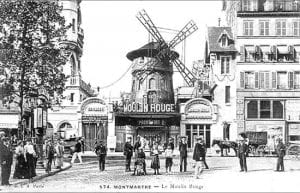 When I first decided to take my troupe to Paris, I was skeptical where we would be allowed to perform. Of course, I could’ve booked some run down old nightclub, where we wouldn’t get any publicity.  This absolutely wouldn’t do, for my players and dancers wanted a real venue to experience real Parisian culture. I had heard stories of a fantastic place where dancers were revered, and played to an audience of hundreds of people! Contacting the Moulin and booking it was difficult, to say the least. They have cabaret performances almost every night, and it is such a popular place that we had to wait 3 months in order to have the place to ourselves for a couple nights. The musicians, dancers, and I headed out with high expectations. Our shows were always packed, and the hall itself was breathtaking. However, the audience treated my dancers much differently than how we were expecting. They would cheer when they showed more skin, yell and toss their drinks about, and utterly disrespect my women every chance they got.1We sure needed the money, so we continued to play all three nights. My women felt used, and dirty after every show.

Joseph Oller is praised among the disciples of the club as a visionary who wanted to create a temple to women. Charles Zidler, his business partner, was a showman, who trained the dancers and helped Oller direct the shows.2 These two opened the Moulin Rouge in 1889, describing it as a ‘pleasure garden.’ The first show was packed, and audiences saw dancing girls, singing girls and girls doing tricks. The only thing these girls had in common is that they were all almost naked. It turns out that even Zidler couldn’t handle Oller’s misogynistic behaviors and left le Moulin after 3 years. Oller still continued to direct cabarets, and hiring young, beautiful women to dance half-naked across the stage for the benefit of their male patrons. The place earned it’s reputation as a place where wealthy men could enjoy the erotic and exoticism of the female form. It’s this constant exploitation of french females that pervades the air of the Moulin. Women are not sexual objects; they are performers and should be treated as such. The building itself was built for the sole purpose of doing the opposite.

Paramount to the Moulin Rouge’s success was this heavy atmosphere of sex-for-sale and sex-as-spectacle. The wealthy business men would pay a few euros to see these women dance. But the dances, costuming, music, and everything the girls did were at the mercy of the men who watched them. Scantily-clad dancers brought more men in, and spectacles of female sexuality made Oller very wealthy. One specific act, performed by two dancers names Missy and Colette, featured the two dancing on stage, ending with one long kiss between the artists. The act, ’Egyptian Dream,’ got the attention of the public and made le Moulin even more popular, that is until a local police chief threatened to shut down the place if it was every performed again.3 It was the sexuality of these two performers that inspired the act to be performed, and to the joy of many of their male audience members. Yet again, the history of the club provides evidence where women are used only to entertain their male audience. This is absolutely unnecessary and inappropriate.

Even the color scheme of the club evokes a sense of eroticism and prepares the audience for sex. The outside of le Moulin is painted red, adorned with a huge windmill atop it’s roof. The windmill attracts the attention of any eye, even if you’re try to avoid it at all costs. Inside it’s doors are velvet curtains of red and black, a stage covered in lights, and tables with red and black accents. Red has always had a connotation for sex, and the exotic. It’s a bright color that evokes memories of a painted red lip, red lace lingerie, and, to be blunt, the reddish-pink color of human skin and the sex organ.4 Black, too, has its own personality. Black is of the night, of secrets and dark alleyways. The Moulin’s juxtaposition of these two colors lets their patrons soak in the ambience of of the entertainment, and allow the sexualization of their performers continue with ease. It’s built to exploit women’s bodies and even the color scheme argues as such. The bright red club is a giant eyesore on le Boulevard de Clichy.

Some might argue that because these women choose the profession of dancing at the moulin that this is what they “signed up for.” To that, I’d argue that these women are looking to be dancers; not to be symbols of sex objects. Of course working at the Moulin Rouge is better than not dancing at all. The Moulin can launch careers, as it as done for many a starlet. It’s a big name, and everyone’s heard of it. However, if there were another establishment to start your career in, as so many girls do in the chorus there, that was more reputable, I’m sure that the women would be flocking there. It’s an absolute shame that these dancers have to work at such a filthy place.

Even as I roamed the streets of Paris after our concerts, I heard people on the street talking about the Moulin rouge. My fears were just as I suspected. One woman saw me, and I’m sure was reminded of our concerts there. She said, “you merely hear the name and images swirl of anti-chivalry and gluttony.” 5 The man quickly replied, “if ever you end up at the playing the moulin rouge, you know you’re going to end up naked!”6 I was appalled that I had even picked the venue to play at in the first place. But to hear these conversations, I was extremely embarrassed. These men who take advantage of the women performers are absolutely gluttonous in their greed for sex.

To me, all of this is an extraordinary problem. Women are not sex-objects, and they should be revered for their talents, not their sexuality. Men paying to stare at half naked women while they perform is problematic. Women should be appreciated for their artistry, craft, and talent. My dancers felt absolutely used after the treatment of the patrons of le Moulin. It is an inappropriate place where dastardly men come to exploit the sensuality of women. I will not be returning soon, and encourage others to avoid the establishment completely. Women must be celebrated for their achievements, not their bodies. I hope that on your nearing visit, you stay away from the giant wind-milled cess pool lurking on the streets of Paris.