If you’ve looked at the maps of the 30 graduates of the Washington Conservatory of Music between 1910 and 1914, you might notice that not all 30 of those alumni are represented. What happened to those graduates? Why aren’t they included? While most alumni of the music school went on to pursue careers in music, some of them didn’t, and instead went on to work on a railroad or work in the home. Though they’ve been excluded from some of our maps for the purpose of focusing on public music careers, they are still worth learning about. Desiree C. Catlett is one of these graduates. 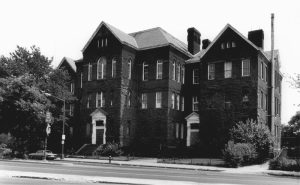 Desiree Cornelia Catlett was born in 1886 in Maryland, but moved with her family to Washington, DC, where she is first mentioned in the 1900 US census.1 She lived with her parents, Jeremiah and Annie, as well as three siblings: Beatrice, Sherwood, and Annie (named after their mother). She was the second child, born around four years after her eldest sister. She attended M street high school, and graduated there in 1905.2

Desiree worked many different jobs after high school, exploring a few different opportunities before finally landing on the one she worked at for at least 33 years. Her first job was a dressmaker, listed in 1910 US Census as self-employed.3 This may have occurred because of encouragement from her mother who was a seamstress. She never dabbled in upholstery or carpet cleaning like her father, however.4 At some point she decided to attend school at the Washington Conservatory of Music (it’s unclear for how many years) and became an alumna in 1910 at 24 years old as a part of the first graduating class.5 She was a pianist, and graduated from the teachers course in piano and theory. This was perhaps thanks to inspiration from her sister, Beatrice, who was a public school teacher. It didn’t pan out for her, though, because she didn’t go to work with children after her 1910 commencement. Instead, she became a hairdresser. This didn’t last long, however, because in 1915 she was back working as a dressmaker.6 Yet again, she switched careers. Her next decision led to work as a printer’s assistant at the Bureau of Engraving and Printing. This is the job she stuck with the longest. From 19177 to at least 1950 she worked in printing at the same company.8

She led a consistent life, working the same job for over 33 years and living in the same home on S Street NW from at least 19149 to at least 1950. 10 Catlett can be found in the map below along with fellow Conservatory alumni.

Yet despite working as a printer’s assistant for most of her life, Catlett didn’t completely disappear from the public music sphere. Her employer, the Bureau for Engraving and Printing, put on a charity benefit performance at the Phyllis Wheatley YWCA, and she participated.11 She was also involved in the Zeta Phi Beta sorority with her sister, and may have helped out at performances with this group, too. Below is a map of all the performances by alumni of the Conservatory who graduated between 1910 and 1914. Catlett is one of those alumni on the map.

Family seemed to be important to Catlett. She and her sister especially seemed to have been fairly close, living together their whole lives. They also lived with their mother until she passed in 1944 at 91 years old.12 Their two younger siblings, Sherwood and Annie, both moved out of the house in their late teens to early twenties.13 However, Annie’s daughter, Dorothy, was living with the two sisters in 1950 at age 14.

1950 US Census Record, courtesy of Ancestry.com

No death certificate has been found for Annie, but it’s likely she and her husband passed, orphaning Dorothy. Desiree herself lived a long life of 92 years, dying of congestive heart failure in 1978 due to arteriosclerotic cardiovascular disease.14

Desiree Catlett feels surprisingly “normal”. She didn’t become a famous musician, or start a grand organization that still runs today. But that’s the point. If someone ever wants to define the word ‘musician’, they’ll need to come up with a definition that includes millions of people like Catlett, who studied music formally at some point but did not pursue a career in it. And if someone is thinking about the impacts of Black education in the early 1900s, it’s crucial to remember that most graduates lived lives far more similar to Desiree Catlett than to Marian Anderson, for example. When solely focused on ‘exceptional’ figures, we are ignoring the impact that graduates who didn’t excel publicly had in contributing to and strengthening their communities.