Out of the Field, Into the Rabbit Hole: From Florence Price to Jewel Jennifer Phillips- Part II

Continued from Part I here. One of the conservatory’s graduates who I’ve looked into very closely thus far is Jewel Jennifer. Jennifer was born in Texas in 1897 to William Jennifer and Syme L. Jennifer.1 She had three siblings—Harold, William Emile, and Archibald.2 Her father was a professor—I don’t know that he taught at the Washington Conservatory (hereafter WCM) for sure, but as other sources reference the Jennifer family’s interest in and association with the school’s events, it’s possible. In Sarah Schmalenberger’s notes, William Jennifer Sr. is referenced as “Rev. Jennifer,” making me wonder about his occupation. Contrastingly, a secondary source lists him as an “educator, attorney and statistician with the federal government.”3 Jewel attended M. Street High School—one of America’s first high schools for African Americans, located in the Northwest Quadrant of DC.—concurrently with WCM.4 While older students at WCM were enrolled in its “teachers course” or “piano tuning course,” Jewel took the institution’s “Intermediate Course” of study.5 Piano was her main instrument there (though she once sang soprano in the chorus of a school musical).6 She graduated from WCM and M. Street High School in June 1912 and 1914, respectively.7

After attending WCM and still only 16, Jewel went on a 1913 performance tour of the American South with Harriet Gibbs Marshall (hereafter HGM), in which they visited several colleges and universities.8 According to the Washington Bee, “Miss Jennifer’s rare musical talent is winning deserved enconiums wherever she appears.”9 She would continue her associations with the conservatory that year, performing three Samuel Coleridge-Taylor pieces at their 1913 commencement.10 At the same time, she picked up professional performing opportunities, and in November 1914 received the Atlantic City scholarship from the WCM, likely to aid her career.11 She stayed active in the DC music and arts community in the coming years; for example, in 1915, she played piano at the St. Paul A. M. E. Church and acted in a dramatic play called The Exile.12 In 1916, she graduated from the Myrtilla Miner Normal School’s Kindergarten Course and performed at its commencement.13 Major life events in 1917 included her marriage to “Dr. William H. Phillips of Raleigh North Carolina” at her family’s home, 445 2nd Street SW, and her appointment as a teacher at the Banneker School, which was right across the street from Howard University.14 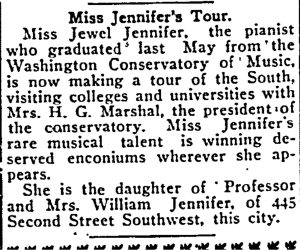 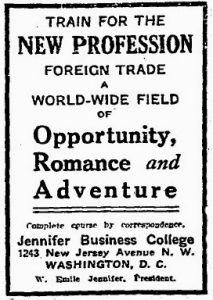 With her husband and now known as Jewel J. Phillips, she moved to Wilson, NC, sometime before 1920.15 Dr. Phillips became a successful dentist in that community; between Jewel’s own education, her father’s occupation, and her educated husband who “had an opportunity to travel extensively in America,” it’s evident that the Jennifers were members of the Black elite in Washington, DC.16 This is corroborated by the fact that in 1920, Jewel’s younger brother W. Emile Jennifer—who’d just received “a bachelor’s degree in law at Howard University”—was given capital by their mother Syme to found the Jennifer Business College, which was the first ever African American Business College in DC.17 This is also reminiscent of HGM’s father assisting her financially to open WCM. By 1930, Jewel had divorced William Phillips and returned to DC’s music scene, with performances on radio shows with “Jewel Jennifer’s Jubilee Singers” and other gigs referenced during 1930 and ‘31.18 The zenith of her career was likely Broadway, as a 1931 article in the Baltimore Afro American references “Jewel Jennifer, a local girl who made good on Broadway…”19 By 1934, she was working for her brother’s business college; by 1940, she was living with her brother and mother.20 The Washington Evening Star indicates that she died in 1949.21

Although aspects of Jewel Jennifer’s biography are incomplete (though I’ve since found more information on her career described in part here), by learning more about her family, time at the Washington Conservatory, and performance career spanning multiple decades of the Jim Crow era, we can better understand relevant aspects of Black musical life in the 20th century. As a member of the Black elite in Northwest DC, Jewel Jennifer attained quality education through trailblazing secondary and post-secondary programs, situating her as a likely exemplar of the DuBoisian concept of the “talented tenth” through her classical education. Likewise, following her training at HGM’s school, she went on to be employed as a performer and teacher. Her association with her brother’s groundbreaking business school—notable since W. Emile Jennifer was himself “a pianist who at one time was affiliated with Duke Ellington and performed around town with the Jennifer Society Orchestra which he founded”—provides confirmation of the Jennifer family’s local contributions as a form of racial uplift. 22

Jewel Jennifer’s biography holds connections to American music more broadly, showing her active participation in a community network of black music branching out from DC. Furthermore, the reality that the Jennifer Business School closed in 1960—the same year the WCM shut its doors—could indicate that the two institutions designed specifically for black students followed a similar trajectory of demise and couldn’t fulfill their mission due to burgeoning societal obstacles. While ephemeral facts (including the address of the Jennifer Business College and the family’s home in Northwest DC) aren’t perhaps as immediately revealing as Florence Price’s, digging deep into Jewel Jennifer’s life and musical trajectory—in addition to other Washington Conservatory gradates from 1910-14—will hopefully help re-conceptualize unacknowledged networks and crucial context surrounding lesser-known black musicians in early twentieth-century America.

19 Afro American, Baltimore, MD, October 10, 1931. Although I couldn’t find another source corroborating this, the fact that she sang at Washington Conservatory and was in theater productions in DC provides evidence that she could’ve done professional theater in addition to her known instrumental (piano) performances.