Wilhelmina B. Patterson at the Hampton Institute

Patterson was born in Calvert, Texas on June 23, 1888.[1] By 1900, the Patterson family was living in Washington, DC at 1214 Linden St, NE.[2] Patterson, who was known as Bessie to her friends and family, graduated from the Washington Conservatory of Music in the Artists Course for Piano and Theory in 1911.[3] When Harriet Gibbs Marshall (1868-1941) founded the Washington Conservatory of Music and School of Expression in 1903, one of her goals for the school was “the thorough training of gifted negroes who will use negro music in education institutions, especially in the southern states.”[4] Patterson fulfilled this objective by first directing the music department at Prairie View State Normal Institute (now Prairie View A&M) from 1914-16, and then teaching at the Hampton Institute (now Hampton University) from 1916-34. At Hampton, Patterson directed the Girl’s Glee Club and also taught music at Phenix High School, a training school for Hampton students studying education located on the Hampton Campus. 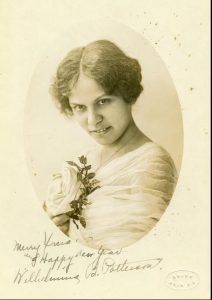 Letters and newspaper account indicate Patterson was a well-liked and popular faculty member at Hampton during the 1920s. In 1921, Hampton President James E. Gregg wrote to Washington Conservatory Founder Harriet Gibs Marshall, “With regard to Miss Patterson I am happy to say that her services here have given pleasure and satisfaction to everyone. She is modest and engaging in her personality, knows how to do her work through really well and has the faculty of getting on happily with other people. We are very glad that we have her at Hampton.”[5] Under Patterson’s direction, the Hampton Girl’s Glee Club performed frequently. In an attempt to solicit performance opportunities for the Glee Club, Patterson wrote Harriet Gibbs Marshall in 1931: “They are about forty in number and could give a very interesting recital, of accompanied and unaccompanied numbers, including negro spirituals by Burleigh and Dett, Indian songs, French songs, English and art songs. They have beautiful white uniforms of simple design, are very expressive in their interpretations and make a splendid appearance on the stage.”[6] The Glee Club’s varied repertoire including both “negro spirituals” and “Indian songs” reflects on Hampton’s tradition of publishing spiritual and indigenous song arrangements in the early twentieth century.[7]

By early 1934, however, Patterson was forced to resign for position at Hampton underscoring the racist structures beneath Patterson’s success at Hampton. Patterson’s forced resignation, including rumors and the ensuing student protests, was covered on the front page of Baltimore Afro-American for several months. On January 27, 1934, The Afro-American printed a picture of Patterson with the headline “She is Ousted.”[8] Describing the situation, The Afro-American reported Patterson was forced to resign “on veiled charges of non-cooperation,” at the same time “There were wild rumors that the dismissed teacher would be replaced by a white woman, presumably Mrs. Harold L. Ruggles, widow of the former head of building construction at the institute who died just recently.”[9] Subsequent articles in The Norfolk New Journal and Guide reported Patterson’s dismissal caused student protests while Hampton administration refused to make a public statement.[10] 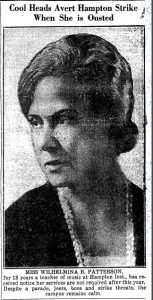 After leaving Hampton, Patterson moved back to Washington, DC, where she directed the choir at Shiloh Baptist Church and served as the music director for the DC Recreation Department. While Patterson’s dismissal from Hampton was unfair and motivated by racist prejudice, it also does not represent the summation of her career and musical experience. Photos in the Dale-Patterson Family Collection at the Anacostia Family Museum demonstrate Patterson enjoyed a rich musical life in DC, including a longtime friendship with famed operatic soprano Lillian Evanti (1890-1967). After her death in 1962, the Shiloh Baptist Church formed the Wilhelmina B. Choir in her honor.[11]In conclusion, Wilhelmina B. Patterson’s musical career reveals Black female music educators shaped their communities through performance, leadership, and education even when opportunities were curtailed by racist educational structures. 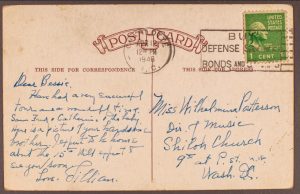 Robert Nathaniel Dett, Religious Folk Songs of the Negro, (Hampton University Press, 1927). Natalie Curtis Burlin, The Indians’ Book An Offering by the American Indians of Indian Lore, Musical and Narrative, to Form a Record of the Songs and Legends of Their Race (Harper, 1907).