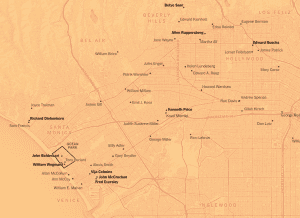 From 1932 to 1975, Annuals and Biennials held by the Whitney Museum of American Art recorded the street addresses of artists whose works were showcased. In 2019, the New York Times used this data to publish a series of static and maps, accompanied by prose, that shows geographically situated hot spots of artistic networks, power, and money across the U.S. Each map covers one of three major U.S. cities (New York City, Chicago, and Los Angeles), and is accompanied by a of its corresponding region. The NY Times also uses this project to discuss the change in the Biennial’s racial, geographic, and gender diversity.