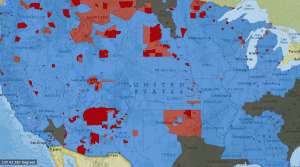 Based on maps produced by the Bureau of American Ethnology in 1899, this interactive, time-sensitive map shows the expansion of United States territory from the late 18th through the late 19th century in terms of land taken from Native Americans, rather than empty land claimed by settlers (as most other maps of this process show.)