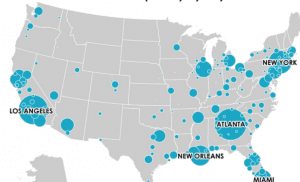 Richard Florida of the University of Toronto discusses the research that he and his team led to answer the question What does the geography of popular music look like? To do this, he and his team collected information from MySpace in 2007, to identify ten, specific popular genres and the number of plays or views each specific genre received. The proportional point maps portray the relative popularity of the specific musical genres in different general areas of the United States, causing the maps to be vague in terms of specific geographic locations. While visually engaging, the maps prevent access to the underlying data, prohibiting detailed data analysis.