This week has been full of researching the famous vaudeville/Broadway duo Williams & Walker. Bert Williams and George Walker were extremely successful actors who used vaudeville as a subversive comedy medium. Even though their shows were branded using racist archetypes, they used vaudeville stages to change the kinds of humor presented to white and black audiences. The characters themselves may not have suggested this, but the comedy became more and more storyline focused, instead of at the expense of the black characters. Their shows could include up to 500 people, and played at some of the most famous venues in NYC. In addition, this duo is credited with integrating Broadway — obviously no small feat. 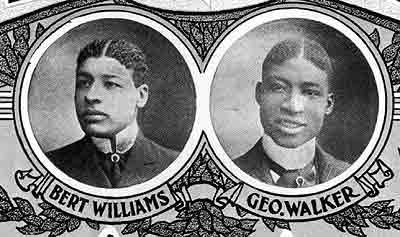 How do these performers relate to Burleigh? Up until 1898, Burleigh served as musical director for W&W shows. After he left, he completely denounced ragtime music and vaudeville shows, and went on to pursue music in the Western classical tradition. However, the path that W&W took could have easily been Burleigh’s (and almost was). This lead me to new kinds of questions. What kinds of venues held what kinds of acts? How closely were Burleigh and W&W situated? Where was there clear overlap, and where was the clear separation? Where were other black performers successful?

This leads me to my map! I chose to do a heat map because spatiality is more important than exact locations in this case. There are about 25 performances listed for each performer, with each venue only appearing once. The number of performances at each venue is not for this map. I’ve set bookmarks from various vantage points because areas like New York City get dense very quickly.

I don’t think that there’s enough data in this map to make any confident assertions with regards to venue patterns. In order to do that, it will be necessary to draw locations other than performance venues. I do, however, think that there are potential next steps if we want to continue with the kind of research that I’ve done, and I think there are two approaches (maybe to be done simultaneously). One starts with venues, and the other starts with people. The first would mean looking up all of the places that Burleigh performed, and see who else performed there.The second involves looking through Burleigh’s associates, and finding where they performed, lived, etc. The first one is more straightforward, but the second allows for immediately map-able data.

I’m currently reading a lot about the racial politics of New York City, and researching things like the Committee of Fourteen, the Marshall Hotel, and vaudeville more generally. Everything is so intertwined that pinpointing one is harder than I thought. Anyways, more to come on that research soon!