Well, it’s about time to close the book (or is it fold the map?) on H.T. Burleigh, at least for now. It feels like we’ve spent so much time looking into Burleigh, when in fact it’s only been a couple of weeks. In reflecting about the course, I’ve come to a few conclusions. 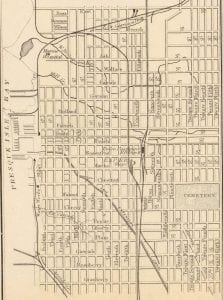 A map of Erie from 1880 from the David Rumsey Collection that coincidentally shows the part of Erie that I am familiar with after this project.

First, I really think that I need to plan a trip to Erie, Pennsylvania after all the research I did relating to it. For someone who has never been there, I know the city layout and the street names exceptionally well. Of course, that got me thinking about how the Erie I know so well exists only in my head. It exists as the street names and layout combined with a brief knowledge of some places in Erie that were important to Burleigh during his lifetime. It’s also not really a knowledge of all of Erie, but rather just the part around where the events in Burleigh’s life happened. All of which makes me wonder if maybe some of the points about space, mapping, and critical GIS from our early Bodenhamer and Sinton readings are slowly permuting and working their way through my brain.1 But I digress.

On a slightly more serious note, I also re-discovered the importance of teamwork over the course of the month. When reflecting on my journey through this class from my first individual map, to the map I made with a partner, to all the maps that we were able to create as a class, the difference is pretty incredible. I learned more each step of the way, but the same was true for classmates. Instead of having a series of maps that mark only my learning throughout the course, I have a map series that demonstrate our class’s collective learning and that’s pretty cool. Not only did we learn more book knowledge through a slew of class readings and research, but we also learned so much about the process. We spent a ton of time in the library learning how to research from Beth Christensen and helping each other problem solve while looking for points. But, we also ended up spending an awful lot of time poring through spreadsheets cleaning our data. After doing so much staring at data, creating messy data and not cleaning it as we go is probably not a mistake any of us are likely to repeat.

Screenshots of my individual map (top left), my map with a partner (top right), and one of our class’s final maps showing Erie (bottom). Visit our Map Gallery to see and play with all our maps!

I’m also extremely thankful that I had other people’s work to build off of and to help me in my work. Splitting up all the researching was super important. Obviously, I never could have collected so much information in such a short amount of time by myself, nor could I have even made sense of all of that data without other people helping me go through it all. Furthermore, it was great to get to put all our pieces together like a giant puzzle. We played with and put together several people’s specialized research, which allowed us to look at the information we collected in many different and interesting ways.

Additionally, having people to help me out when I struggled was an important part of what I was able to accomplish. I think I’ll be eternally grateful to Izzy and Jessie for finding locations for so many of my data points that were location-less because I couldn’t find an address. Finally, the maps that we created from this data look so much nicer than anything that I could have created alone because I had people who knew what they were doing to take my research, data, and prose, combine it with everyone else’s contributions, and create some beautiful maps.

So now, I guess it’s at last time to say “mission accomplished”. There may be more that needs to be done, but if there is anything else that I have learned in this class, it is that knowing when to quit and let others do the next stage of the work is important too. We can’t be the heroes or do absolutely everything that we want to, especially when we only have a month. It’s good to focus on all of the neat things we were able to accomplish instead of everything yet to be done. Just as we picked up where the researchers who went before us left off, it’s now time for us to pass on the torch to the teammates that will come next.