Data Rich Sources, Where are They?

I have had amazing results from online Newspaper collections where data streams into my spreadsheets at over 20 entries per hour. Other sources have not been so fruitful. Textbooks and periodical collections include more steps to transcribe data and are often less data rich. The concentration of important information is limited by the written prosaic format. International newsprint databases are much less intuitive than American and British which operate with PDF or ReadEx formats, easily accessible and searchable. After searching for three hours in European newsprint databases for documentation of Burleigh’s tours through Britain, Germany, and France I returned to American databases with searchable text. The lack of foreign articles following Burleigh’s travels in Europe is partially due to his unwillingness to give interviews. The New York Amsterdam News printed the following after Burleigh refused to give a pre-tour interview. 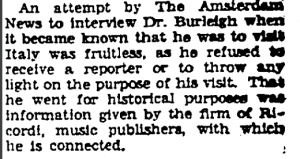 We researchers have not yet found any international coverage of Burleigh’s tours or even itineraries printed in American newspapers. There is little doubt that Burleigh traveled to England, France, Italy, and Germany during the early 1900’s but little written evidence remains. A potential lead may be personal letters held in the National Archives or private collections, though access is limited by the current government shutdown and requests for access to private collections. Easily accessible are the correspondences between Burleigh and W.E.B. Du Bois, accessible here, which shed light on Burleigh’s political life.

With the final days of research ahead we leave interim with a significant amount of data, presented in cartographic form, and leave the research to summer CURI researchers who will continue our research and hopefully find information about European tours!