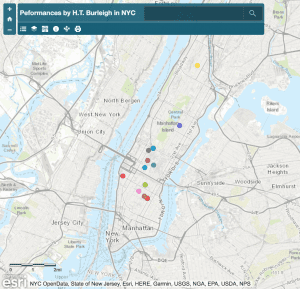 As a class we’ve now spent a week reading about and researching Harry T. Burleigh. After a meeting where we chose the kind of maps we want to eventually make, everyone got to work on their projects. I am focusing on a map of Burleigh’s performances in New York City, which should give a detailed look into Burleigh’s extensive performing career. In theory, this should be one of the easier maps to make. Most performances have exact dates, and some have concert programs which are a really rich source of information. On the other hand, Burleigh was performing almost constantly from his arrival in New York until his death which means it will be difficult, if not impossible, to make this map exhaustive.

One of the first issues we ran into is Burleigh’s weekly performances at St. George’s Church and Temple Emanu-él in New York City.1 It is important that we include these locations in our map, but the considerable number of performances skews the map away from other places that Burleigh might’ve performed at less frequently. Our next step ideally will be creating separate data sheets for these two spaces, and then putting all of the information into a timeline that better illustrates the scope of Burleigh’s average week.

The quickest source to comb through so far has been the Carnegie Hall Performance Archives which was a very user-friendly source that gave the programs for all of Burleigh’s 13 performances. However, past our initial searches on the library website, which have been fruitful, I think the main concern for me right now is making sure that we get the performances that would’ve been reported in black newspapers. So far this has been a lot of searching on databases of African American Newspapers, and while I’m finding many occurrences of Burleigh’s music being performed, it is harder to find performances by Burleigh. From in-class discussions and readings about black musicians in New York, I’m starting to understand how Burleigh’s performing career in traditionally white and black spaces is something we need to pay attention to in our research.2 I don’t yet know how we will show this on the map but I hope it will become clearer in the next two weeks.