In our search for sources with specific location information, Latitude-Longitude pairs or street address, I decided to search for Harry T. Burleigh in the genealogical databases Familysearch.org and Ancestry.com. Before long, I worked my way through all available public records of Burleigh’s life and discovered that no records pre 1900 have been catalogued in an online format. 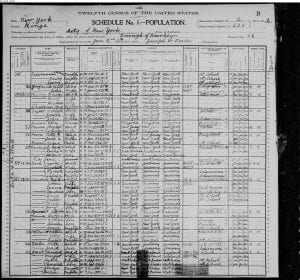 In addition to census information, Ancestry.com also catalogues passenger manifests from 20th century passenger ship voyages to Europe from the Port New York. In 1921 and 1925, Burleigh traveled via steamship to England and France, performing original compositions, spirituals, and standard solo repertoire for royalty in both countries. In England, Burleigh performed for the Duke and Duchess of Sutherland and Lord and Lady Algernon Gordon-Lennox. While in France, Burleigh also performed for royalty, though no names are offered in American newspaper publications. Even more surprising is the absence of any mention of Burleigh’s transatlantic journeys in African American newspapers, which are searchable on the Readex database of African American Newspapers.

Before the end of this week, all newspapers referencing Burleigh will be collected and entered into our data collection system. Next steps include data compilation from genealogy databases and newspaper collections to build our data set and cross reference existing sources.

A rough plot of data collected from genealogical sources is presented below.