After reworking maps from the Atlas Historique de la Musique or from A History of Western Music last week, our class has now delved into our research on H. T. Burleigh and started to plot our first sprinklings of data onto maps. 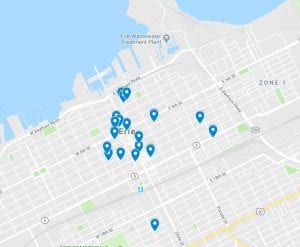 Our early data points for Erie are pretty clustered together.

My researching and mapping is focused on Burleigh’s early life in Erie Pennsylvania, where he lived until he was accepted into the National Conservatory of Music in New York in his early twenties. Most of the places we’ve found have been clustered in the same part of Erie, which can be seen in our early map. However, we’ve come across several points outside of Erie and learned that Burleigh travelled quite a bit in the lake Erie region, both to perform and to visit friends.

So far, my sources have consisted mainly of looking through newspapers, and many of the mentions of “H. T. Burleigh” (or any of his name derivatives) come from personal and society columns detailing parties, church meetings, or who is in town. While not all of this has proven helpful, it is quite interesting to look through because it allows a little window into Burleigh’s life. I’ve learned about his friends and acquaintances, his frequent trips to Cleveland and Buffalo, and some of the other things he was involved in, such as the “Union Club,” whose purpose was to improve the lives of young men through social support.1 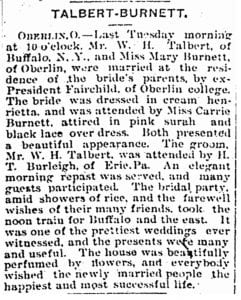 The other source I’ve been working with to chart Burleigh’s performances and the places he went is a book chapter by Jean Snyder called “One of Erie’s Most Popular Church Singers”.2 Many of Snyder’s sources for this information are also newspapers, but most of them are different from the ones I had already found through St. Olaf’s newspaper databases. However, there were a couple of overlaps and because of that, Snyder’s chapter alerted me to a newspaper clipping I might have otherwise overlooked which sent me on a short and fruitful tangent.

The newspaper piece was an announcement for a wedding between W. H. Talbert and Mary Burnett in which Burleigh was the best man.3 Snyder’s chapter points out that this Mary Burnett Talbert was a prominent civil rights activist and advocate. She is mainly remembered for her work as chairman of the Dyer Anti-Lynching Bill committee, her role as vice president for the National Association for the Advancement of Colored People (NAACP), and her work as a national organiser for the National Association of Colored Women, although this only scratches the surface of what she accomplished throughout her lifetime.4

At this point, I have no idea how much Talbert and Burleigh knew each other, or if this was the only time their paths crossed. But, it does, perhaps, provide a reminder of the network of talented people Burleigh constructed throughout his life, even at this early time.