On Data Compilation and the Cartographic Presentation of Musical Concepts

Last week we were tasked to redesign musical geography maps from A History of Western Music (Norton, 2014) and Atlas Historique de la Musique and in groups of two we set out on our cartographic quest. The map below shows the distribution of Italian Music Centers in 1650 and was included by Norton to show the impact of Spanish conquest in Southern Italy on Italian musical traditions. The greater concentration of cities in the north stands out against the three southern cities in an apparent indication that northern Italy held primacy in musical pursuits and patronage during the 17th century. 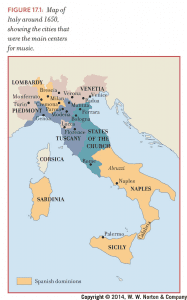 Though clearly delineated on the map, political boundaries were in a continuous state of flux as rulers and religious powers laid claim to Italy. Due to the movement of people these borders are in no way accurate representations of the cultural amalgamations present across Italy around 1650. Information, culture, ideology, and musical tradition crossed political and religious boundaries throughout the 17th century. This movement undermines the integrity of the left map which shows only hard lines between political entities.

In an effort to create a map which better represented the cultural amalgam of 17th c. Italy, I decided to leave out political boundaries altogether and focus only on the number musical events per Italian city. This map included below and my first attempt at mapping was by no measure a comprehensive representation of Italian music centers. Even after the inclusion of my partner’s data set (Compositions per city) I could see that considerable additional research was needed.

What follows is our reworked version of the Norton map presented in an interactive online format with links to reference texts and specific geographic positions of 17th century performance venues in each music center. Three layers of data may be toggled on and off in the sliding menu on the left; 17th c. Composition per Italian City, 17th c. Italian Composers, and 17th c. Italian Performance Venues. Toggling between these layers in various combinations give the user interactive insight into the distribution of compositions, composers, and performance venues in 17th c. Italy. Our redesigned map does not attempt to show political boundaries due to their unceasing fluctuation throughout the 17th c. and our focus on the musical aspects of Italian life over the political.

Citations: Included in each popup on each location point.