In my last blog post, I posted the state of the map that I had made featuring opera houses and companies in East Asia.  Since then, I added a few more points that locate centers of opera in East Asia, combined my data with my partner’s, and tidied up the map.  I’m pleased with the result; while it’s not as comprehensive as I had originally hoped (noted in my last blog post), it is accurate, easy to use, and the information is thorough.  My partner and I were working to improve upon the original print map from the Atlas Historique de la Musique entitled “Centre d’Education Musicale Opéras et Festivals en Europe Orientale et Extra-Européens”.  Basically, the map attempted to be as comprehensive as possible by locating on a world map as many music schools, “opéras,” and music festivals as the author could.  Pictured below is the East Asia portion of the map, which my partner and I decided we would focus on because we both have experience in Asian languages and history. 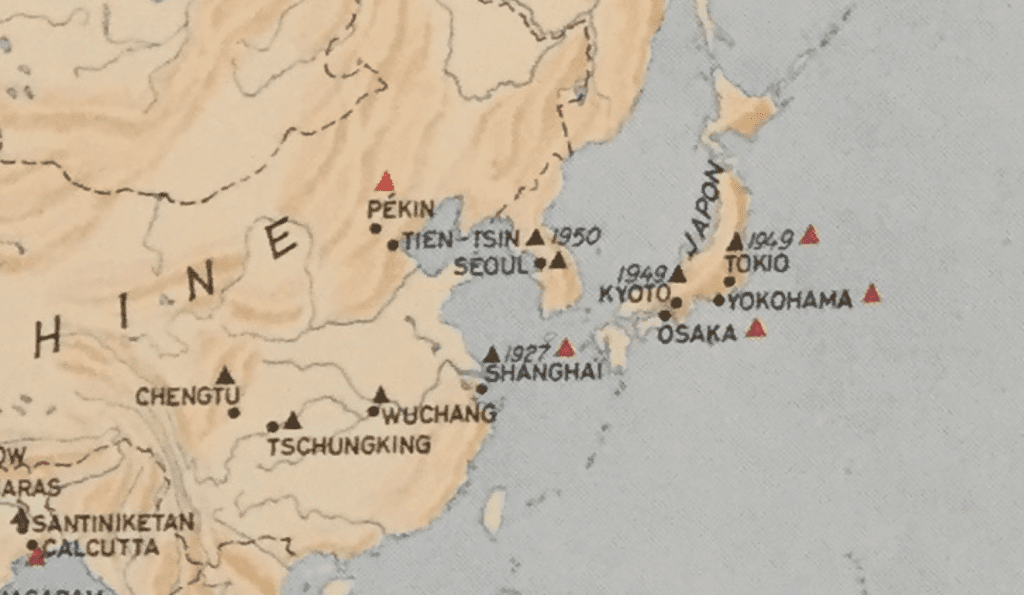 There are many flaws with the original map which we intended to ameliorate.  First of all, the map features no music festivals, though there was a symbol for them in the legend.  Why even include festivals in the legend if there are none on the map?  While the map is impressively extensive and has many data points, they are cluttered, poorly marked, inconsistent, and sometimes seemingly arbitrary because there is no citation or note associated with the map in the atlas.  As one can see in the above picture, city data are crowded near each other, too close for comfort and readability. And this is one of the less cluttered areas on the map!  Pictured below is the area of the map from Eastern Europe and part of the Middle East.  It is crowded and difficult to understand which information goes with which point.  Furthermore, why note the date of founding for centers of music education but not opera houses or companies? When making a digitized version of the portion featuring East Asia, my partner and I aimed to create a more comprehensible, consistent, and accurate map. 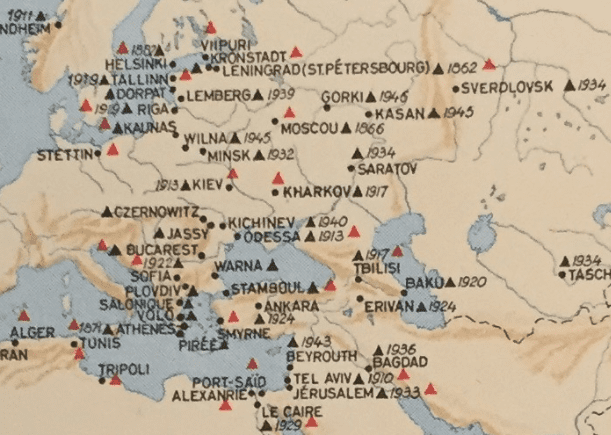 The portion of Eastern Europe and (part of) the Middle East from the map “Centre d’Education Musicale Opéras et Festivals en Europe Orientale et Extra-Européens” found in Atlas Historique de la Musique. As one can see, the data points are clustered together and it is hard to read and understand what goes where.

In order to accomplish this, we researched locations that the original mapper provided such as Beijing (Pékin) or Tianjin (Tien-Tsin) as well as others that we came across that were more recent than the mid-20th century.  The result of our work is shown below.  While there appear to be multiple points on top of one another on this map (similar to the original print map), a user can easily zoom in and differentiate the points.  In addition to this, this map features the centers of music education and opera placed at their real locations! Instead of generalized data next to a city name, now the points are location-specific.  Furthermore, by using layers my partner and I allow the user to separate “Music Education Centers” and “Opera,” making the user experience even more simple.

On the original map, the creator seemed to arbitrarily put founding dates down for nothing other than centers of music education.  Why not include the founding dates for opera houses and companies too?  We did just that! Now the map is more complete than previously.  Another addition we made is include the website of the locations.  Obviously, the original mapper was not able to do this, seeing as the printed atlas was published in 1960.  But we think the inclusion of the website increases accessibility for the user and allows them to fact-check us themselves!

Our end result isn’t all I’m making it to be, though.  There are some data points on the original map that had the “Opéras” symbol next to them but I could not find any notable opera company or house in the city. (Take, for example, Yokohama and Osaka in Japan.)  In addition to this, my partner didn’t manage to find data points for Chongqing (Tschungking) or Tianjing (Tien-Tsin), though those cities were originally marked with the musical center symbol and date.  For this reason, it would have been invaluable to us if the original creator(s) of the atlas had included citations or notes.

In the future, as we continue to try to improve on traditional music historical maps, we will face challenges such as differing research methods from the original creator(s).  Perhaps the original map was contributed to by people who were active in the opera scene in East Asia, hence they knew a lot about it already.  Perhaps the original creator had been researching and travelling for a number of months or years, a much longer time period than we ourselves had to research on the internet (a few days).  It’s not possible to know where the other person was getting their information from (in this circumstance) or what experience they had.  Assumedly, the original creators of these music historical maps had more time on their hands than we do in the few short weeks of this interim course; this is another challenge we will face.  But don’t we all face this challenge? Time is a valuable thing and we could all use more of it, especially if we can spend it researching.