The Atlas Historique de la Musique map of Conservatories, Festivals, and Opera Houses in Eastern Europe and Beyond was eye catching because of its simplicity, but was confusing for the same reason. As many others did with their own maps, our goal was for the map to make sense on its own, not needing a blurb to accompany it. 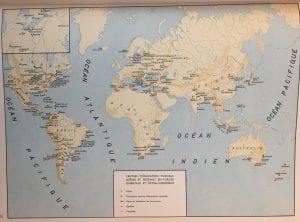 There were a couple of ways I tried to make my map, and our joint map more comprehensive and useful. We lessened our scope to East Asia, allowing us to focus on detailed information instead of more markers on the map. We included the names of the conservatories or opera houses in the language native to the area, understanding that language is an important signifier of power and purpose in graphics. To capitalize on the fact that Google’s maps are interactive, we included a link to the website (if the institution is still running), and a picture of the campus. Finally, I differentiated, for the conservatories, between what kind of curriculums are taught; this could be either traditional musics, Western musics, or both. On its own, our map our map seems to be suited best for the travel industry or study abroad programs in the West.

I think that this map is worth continuing if another element was added to it. Of course it could be expanded to include more of or all of the world, however, it has also provoked new questions. How are the opera houses and conservatories related to music making in a given city? Who were the musicians to come out of the conservatories, and what styles did they spread to the rest of the city or country? Do the founding years of opera houses in a given country connect to the social, political, or spatial history of that place? Given more time, these are questions that could be furthered engaging the new map, and questions that make historical maps worth the analysis.