The Protestant Reformation happened over 500 years ago, so why should we still care about it? It was just a whole bunch of religious white men arguing with each other, right?

Well to some extent, yes. But the Reformation changed the entire world, especially in regards to music. The Reformation and music are tied so closely together that maps like the one below are discussed in Burkholder’s  A History of Western Music. 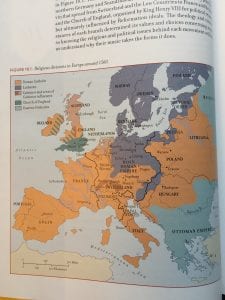 Religious Divisions in Europe around 1560 doesn’t seem very out of the ordinary at first glance. However, the more you look at it, the more questions come up. How did the cartographer get all of this information? Nothing is cited. The map also doesn’t define its key, so we have no idea how they defined each religion. The lines themselves seem pretty arbitrary, and just the act of drawing these lines essentializes the religious practices of enormous sums of people across Europe.

That’s the second thing about this map. The title doesn’t specify the religious lines they are drawing are Christian. The map gives off the idea that there were no people in Europe of a non-Christian religion (unless you count the bottom left corner, were the author sprawled the word “Muslims” across the Aegean Sea, hoping that would somehow account for the entire religious tradition that would have existed for at least 900 years up to this point).

Reverting back to my point, to say I have a few problems with this map is an understatement. In attempting to remake this map (which you can read more about here), I gathered information about composers and compositions in the area. Unfortunately, as much as I really hated the original map, in order to remake it in a way I knew I could do, I had to go on the assumption that the data already laid out was correct and credible. I planned on overlaying the new data I found on top of the old map in the hopes of showing how Catholic music differed from Protestant music. Due to issues I came across that I explicitly lay out in my previous post, the map didn’t really turn out the way I had hoped, but it was better than nothing. At least it showed more than the original map had:

The map here shows the composers, their respective compositions, where they were (probably) composed, and, for most of them, a recording of the piece. When Isaiah, my partner, and I came back together to look through our data and compile it, we found a serious issue. Our data wasn’t compatible. While I was finding specific pieces, he was looking for publishers. Theoretically, I might have been able to find where my pieces were published and Isaiah could’ve found pieces that his publishers published, but we simply didn’t have enough time to do that kind of extensive research. Eventually, we decided to just overlay our information on top of each other and add a third layer: the original map’s religious divisions. As you can see, we did our best color coding and replicating these lines. Since the lines in the original map were pretty arbitrary anyway, it didn’t bother us too much to just copy them to our map the best we could:

Our third and final map was made via ArcGIS Online, which allowed us to show Isaiah’s information as a heat map and my information as individual points. We decided to do it that way so one could see the relation between the publishers and the composers with a little bit more ease. It gave the separate data sets a more distinct look, and I think it overall just made the data more discernible (and more fun to look at–heat maps are cool!).

This map has so much potential, so of course it is worth recreating. In order to go any further with it, the first step would be to validate and find a way to better represent the religious tendencies of 16th century Europe. Then, you could combine mine and Isaiah’s research in order to find more publishers, more composers, and more works. With a larger data set, you might be able to learn more about the differences between Catholic and Protestant music and learn how the Protestant liturgy developed.