Don’t Map Something You Haven’t Thought Through

If there’s one thing that I took away from this small mapping project, it’s that you want to set your goal from the beginning and have a good vision of where you what you want to show with your data before you start delving into books and web archives.  To be at least a little easier on myself, the printed map from the  that my partner and I were tasked with improving upon was vague and messy.   Were these the first instances of organs recorded in this area, or just the time frame of when the church began using them?  What sources was their data from and how consistent was it with what their map wanted to project?  I had to ask myself these questions when deciding on how to improve upon it, so the easiest way to at least make the data more consistent and (hopefully) accurate was to condense the area of the map to just one country: France.  This was definitely the point where I felt most comfortable, and it pretty much went downhill from here.  As I was flipping through books and webpages, I began to understand how little research there was on individual organs for individual cities and towns in France, especially on the supposed “first” organ in that area.  In order to make my research a little more manageable, I narrowed it down to the first recorded organs in major cathedrals in French cities.  This was very helpful on the research side of things, and I soon found a website with a considerable amount of information on the history of organs in a vast quantity of French cathedrals.  Unfortunately, the data within this site still felt very inconsistent, and most of the original organs at these locations had little to none of their history recorded as they were often smaller and less important instruments.  I settled with recording the century, cathedral name, and, if possible, maker of the organ, and then made my map.  It wasn’t ideal, and was far from a truly historical accurate map of the first organs in France, but I felt that it still improved upon the original map in a number of ways.  For starters, we included our resources, and for a map that would most likely only be used for further research, that’s half its practicality right there.  We also had a conciser, more legible, and perhaps more realistic map.  Our data was accurate and covered more than just the century of the organ’s first presumed occurrence in the town.  I definitely learned through this project that setting your scope and exact question as early as possible is essential in gathering data efficiently and picturing your final map, and I absolutely intend to start off our H.T. Burleigh research on as best a note as possible tomorrow by doing just that. 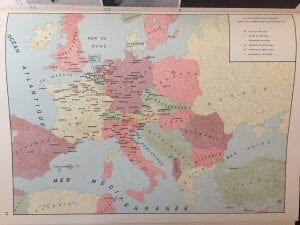