The last blog post I made was right before I got on a plane to Paris to do archival research. And now, after two weeks, I have the opportunity to reflect a little bit on the time I spent there. It was a fantastic blur of research, sight-seeing, and LOTS of walking. I liked how the last researcher, Carolyn Nuelle, organized her “Retrospective” blog post, so I’m going to format mine the same way.

1. The Département de la Musique: I spent three days total in this little “Salle de Lecture” mostly going through microfilm and periodicals. I started off with records from the “Fonds Montpensier” to look for missing information on performances outside of France and articles about critical reception. After that, I looked at a couple issues of the Pro Musica Quarterly (and found mentions of my home town, Kansas City!) and also several issues of the periodical Le courrier musical. It was a pretty fruitful couple of days, and a great place to learn the ropes. 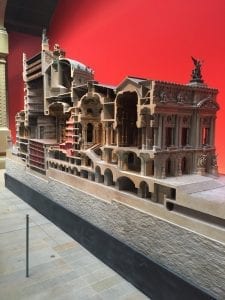 A model of the Palais Garnier in the Musée d’Orsay. 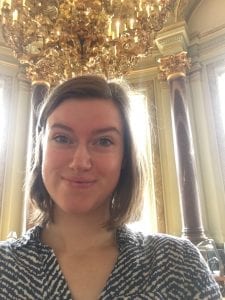 A secret selfie I stole in the Bibliothèque Musée Opéra.

2. The Bibliothèque-Musée de l’Opéra: This was perhaps the most glamorous place I worked in the whole two weeks. This small Salle de Lecture is situated within the beautiful Palais Garnier, complete with marble columns, sparkly chandelier and, at least while I was there, very few other researchers. The librarians were extremely friendly, and I spent most of my two days there transcribing letters between Milhaud and Jacques Rouché, the director of the Opéra in the 1920s and 30s. We were looking for evidence for why so few of Milhaud’s works were put on at the Opéra. In total, I transcribed around sixty letters, and I think there are some compelling leads among those sixty (at least I hope so!). I also looked for a couple of photos of Milhaud’s operas, but unfortunately couldn’t take any pictures of the ones I found because of rights.

3. The Département des Arts-Spectacle: I only spent one day in this Salle de Lecture, situated right across from the Département de la Musique at the BnF Site Richelieu. I had to do a little more sleuthing here, because I was looking for any information on the Ballets Suédois and performances of Milhaud’s ballets. I ended up looking through a hard copy of their catalogue and found several promising documents! I even got to see the originals because the microfilm machine was broken (fun fact – French libraries have most documents scanned onto microfilm to preserve the originals) I found several new performances for our spreadsheet, and some interesting information about the Ballets Suédois to boot!

4. The Mediathèque Musicale Mahler: This charming little private library is situated very close to Parc Monceau, a large public park in a less tourist-y area of Paris. So the “quartier” (neighborhood) was just lovely. I tested my French skills by calling in advance and setting up an appointment to consult their Milhaud dossier (a collection of press clippings and programs for Milhaud’s works). Unfortunately, many of the press clippings they had compiled were from 1950 and on, so I didn’t find a whole lot of performance information that was of interest to us. However, I did find a lot of good critical articles to excerpt for later. The librarians there were absolutely lovely, and I was able to enjoy a picnic lunch in Parc Monceau. 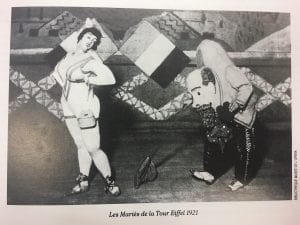 An interesting snapshot I found of Les Mariés de la Tour Eiffel in 1921.

5. The Archives Nationales (Pierrefite-sur-Seine): On my very last day in Paris, I took the metro to the National Archives, located just outside the Paris city limits. The building was huge, modern, and chic – much different from the other sites I had visited. I got a reading card that very day, and embarked on a search for mention of a debate in the Assemblée Nationale about the German premiere of Christophe Colomb (we had come across a mention of this by Milhaud himself in his autobiography). I enlisted the help of several librarians to find what I needed. Unfortunately, despite the fact that I looked through three huge stacks of “procès-verbaux” (minutes) of the Assemblée Nationale in 1930, I found no mention whatsoever of the debate, and even stumped the librarians who helped me! They suggested that I look in the archives of the Assemblée Nationale itself, so maybe that is a place we can add to the list for another researcher next summer.

6. When I wasn’t researching, like Carolyn I walked around trying to find as many sites as I could that pertained to our research. In general, I just did a whole lot of walking and exploring the city. I got over 10,000 steps in each day easily. And, of course, when I wasn’t walking, I was eating well and reading lots of books. I even got to watch some incredible fireworks on Bastille Day. What a life, am I right? 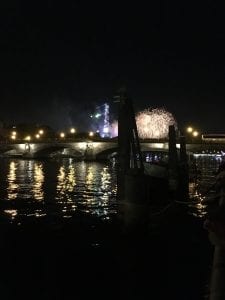 Fireworks on Bastille Day behind the Eiffel Tower.

I am incredibly grateful to everyone who helped get me to Paris, and especially to Professor Epstein for giving me this opportunity along with all of the resources to be successful. A HUGE thanks also to the CURI Program and to the Office of International Studies for financing the trip. This was the opportunity of a lifetime, and I will never forget it (or Darius Milhaud probably!)