We are now up to 321 entries in our Milhaud performances spreadsheet. (Take a look here: <https://docs.google.com/spreadsheets/d/1-mSTi7F4Cw8WLE2q_qfRpJaAy-YzghOioJlrI2aPmbk/edit#gid=0>) But how did we get all this information?

Ok, so we found a lot of sources, but how credible are they? Well, generally speaking, we can trust that a performance actually happened if a primary source mentions the performance after it took place (i.e. not advertisements/announcements for future performances). Here’s a list of kinds of primary sources from most to least credible:

Secondary and tertiary sources are as reliable as their scholarship. Generally, the newer the secondary or tertiary source, the better, as new archives and sources are being discovered and utilized all the time. Knowledge is constantly revised, and catalogues expanded. 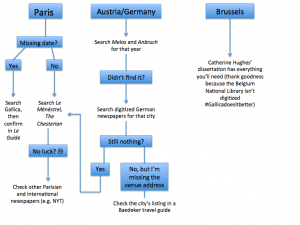 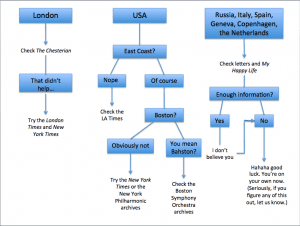