After WWI, which proved to be a particularly devastating time for France, a new sense of nationalism began to grow in the world of music.

Among the new nationalists of the time, Jean Cocteau, French writer, designer and playwright, wrote a book entitled Le Coq et l’Arlequin, in which he gave his vision about what the music of his time should have been.

In this book, Cocteau urged all French composers to avoid being corrupted by the “musical fashion” of the time, mainly the German and Wagner type of music, which until then had fascinated the French public, mainly members of the elite class.

In fact, he wanted French music to lean more towards the “Coq” ideologies, which is a metaphor for the authenticity of “Frenchness”, based on the values and traditions of the Gallic spirit.

On the other side, the “Arlequin” which symbolized an impure France whose virtues were weakened by foreign influence, represented everything that Cocteau despised and which he invited French musicians and composers to revolt against.

Angry about the strong German influence in French music and among French musicians, Cocteau wanted to witness “une musique francaise de France” (in English “a french music from France”). Therefore, he asked all musicians to stop “making art from art”, abandon the old impressionist style but instead be more creative in their creations, even if that involved critics from the public.

Rather than a focus on expression, Cocteau asked for more originality, clarity, simplicity and structure in French music. Moreover, he insisted on the need to make music that better corresponded with the sentiments and emotions of the masses, which meant to abandon the purely romantic French music, that did not match the anger and sadness of the population in the wake of the war. 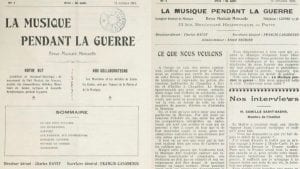 Among other nationalists of his time was Vincent d’Indy, who wanted French music to “liberate itself from the German musical domination” , which he called “the germanization of France”. Alongside a group other musicians and artists, he created “La ligue nationale pour la defense de la musique francaise” in 1916, which aimed at promoting solely French music in France and abroad and therefore served as a propaganda for French artists to become more patriotic and produce “French” music.

This is one of the may ways that nationalism began to take place in the world of music and how French musicians slowly began to adopt a music that better fitted the ideologies of their country as well as the spirit of the masses, rather than those of the privileged aristocracy.

Only by making music that was purely French, were French artists able to protect themselves from being “slaves of their publics” and reject all forms of continuity that resulted from the German influence.