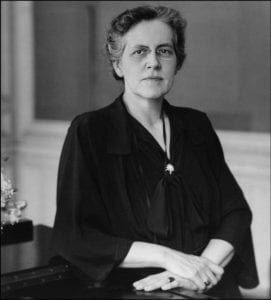 Nadia Boulanger is widely regarded as one of the most influential music teacher’s of the 20th century.  Her teaching position at the American Conservatory at Fontainebleau helped mold a new generation of American composers, including Aaron Copland, Virgil Thomson, and Leonard Bernstein. But her very existence poses questions: Where did she come from, and how did she enter into musical consciousness as the pedagogical standard? Why did she start composing? Why did she stop composing? Why did she teach? Who did she teach, and where? What made her such a good teacher?

Who exactly was Nadia Boulanger?

Nadia Boulanger was born on the 16th of September in 1887. She officially began studying composition at the Paris Conservatoire at the age of 9 (though she had been taking classes there since the age of seven), under the direction of masters like Vidal, Widor, and Fauré. According to Caroline Potter in her book Nadia and Lili Boulanger, success at the Conservatoire was based on how many prizes and competitions a student could rack up, and “Nadia Boulanger’s aim was to win as many as possible in the shortest possible time” (Potter 5). And win them, she did. At the Conservatoire, she was consistently ranked in the top of her class in aural skills examinations and won prizes for harmony, organ, and fugue, and piano accompaniment. In 1908, she entered into the prestigious Prix de Rome composition competition, causing quite the stir when she submitted an instrumental fugue for the preliminary round instead of the traditional vocal fugue. That year, her cantata La siréne came in second place. Her compositional style can be categorized as highly chromatic, though tonally centered. Below is a playlist of her music.

Beyond her work at the conservatory and in the Prix de Rome, Boulanger was an accomplished composer. Her sister, Lili Boulanger, was also a gifted composer, and Nadia considered her sister to be far more talented than herself.  She composed frequently until the death of her beloved sister, Lili, in 1920. After Lili’s death, Boulanger turned her attention to teaching, becoming a founding member of the American Conservatory at Fontainebleau in 1921 in addition to teaching harmony, counterpoint, music history, analysis, organ and composition at the Ecole Normale de Musique from 1920-1939. Boulanger composed her final pieces in 1922.

She had been working as a teacher at several different institutions from 1907 onward, and after the death of her sister threw herself even further into her pedagogy. Today, she is renowned as “as one of the greatest music teachers of the twentieth century” (Potter 127). We have Nadia Boulanger to thank for the music of Aaron Copland, Phillip Glass, Elliot Garter, George Antheil, and more. Her work specifically at Fontainebleau opened doors for her to lecture and tour in America during the 1920s. In fact, she was offered a professorship at the Curtis Institute in 1925 because of the outstanding reputation of her students, but she refused as her mother didn’t want to live abroad (Potter 134).

This interview offers interesting insights into Nadia Boulanger’s teaching philosophy. She didn’t believe in genius,  but she did believe in music. Her mannerisms were often described by her students as severe. Pupils either loved or hated her strict methods. For a more detailed account of her teaching style, examine Caroline Potter’s work Nadia and Lili Boulanger.

More Than Just a Teacher

Beyond teaching at world famous musical institutions, Boulanger also taught a  number of pupils privately. In addition to her teaching, Boulanger continued to perform as an organist, going on tour to the United States in 1925 to premiere Copland’s Symphony for organ and orchestra (Potter, Grove).  Boulanger also operated in the social circles of musical life in 1920s Paris: she was friends with Igor Stravinsky and worked under the patronage of the Princesse de Polignac. Later, she would travel to America with Igor Stravinsky to visit Darius and Madeleine Milhaud, producing this anecdote:

Nadia Boulanger…suggested she play some piano duets with Igor. I [Madeleine Milhaud] attended the rehearsal. She was very severe, and at one point slapped Igor’s hand saying ‘No, Igor, it isn’t right. Count!’

-Excerpt from “A Conversation with Madeleine Milhaud” by Roger Nichols

Nadia Boulanger was active in Parisian and American life throughout the 1920s and 30s. In addition to teaching some of the most prolific composers of our age, she lived alongside and participated in the new musical cultures that were constantly evolving. From her severe mannerisms to her unique understanding of how music works, Boulanger is an enticing enigma. Why were her teaching methods so successful? Why did she believe her compositions to be so sub-par? Are there musical remnants of her teaching style in the compositions of her students? She sponsors many questions about musical life in the 1920s and has an impact that is felt even today. Do more research. Unlock these secrets. Maybe one day, we can begin to answer these questions.

Nichols, Roger.  A Conversation with Madeleine Milhaud, Faber and Faber, 1996.

Portrait of Nadia Boulanger from https://blog.edmodo.com/wp-content/uploads/2014/03/NadiaBoulanger_portrait.jpg.