The Joys and Frustrations of Visualizing Catalogued Data

Throughout the process of digital mapmaking, there are many roadblocks that can simultaneously frustrate and challenge. After having spent hours upon hours of cataloguing the appendix on Programs of Modern-Music Societies in New York from 1920-1931 in Carol Oja’s Making Music Modern: New York in the 1920s1, I reached a point at which I decided I had accumulated enough data to attempt to map it all out. So, my data went from this: 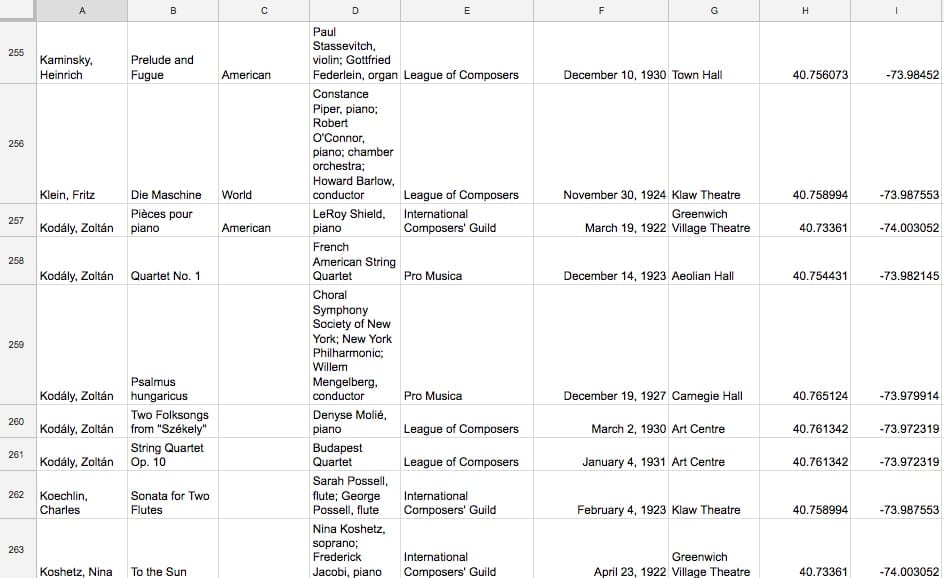 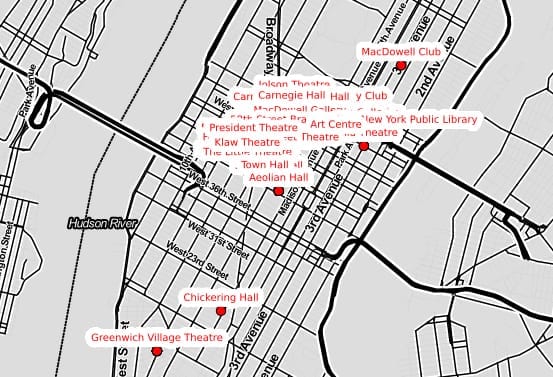 Without even quite realizing it, I had noticed that my map was quickly falling under the category of Deep Mapping 2
. With over 250 data entries and 7 categorizations, my map was slowly but surely gaining Deep Mapping capabilities. Given the sheer number of entries in the catalog, many interpretations and readings of my visual representation of Oja’s data could be argued. This excited my interest in the potential of this map and inspired me to continue working to create more ways to tweak with the data and introduce more arguments. Through this exploration of buckets, I overcame a struggle I had been having earlier as I tried to accommodate multiple data entries on a singular geographic point.

A central issue in mapping venues of modern-music societies is that there are an astronomical amount of works being performed at a limited number of venues. Because of this, Carto, the mapping software I am using, cannot represent every data entry as they are all stacked on top of each other. As I continue this project, I hope to incorporate code that will allow me to “spider” multiple entries on a singular point. At present, however, I found that buckets can partially overcome this tedious issue. 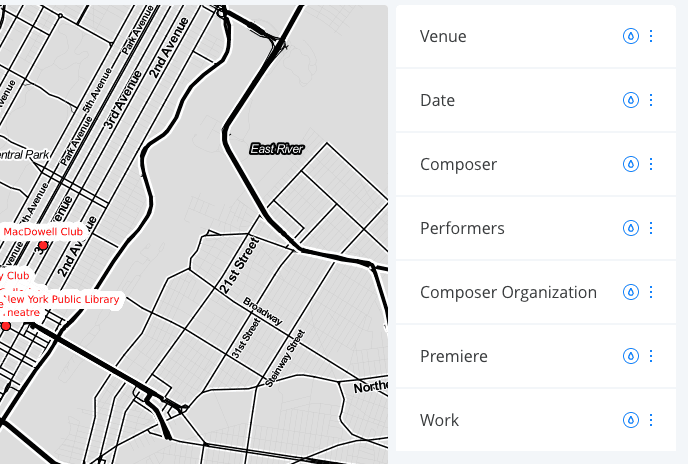 Using the widgets seen above, I can hone in on a certain category to limit my data and in turn see different entries on data points. Bucketing also allows for examination of geographical tendencies of any category, for example, composers, composer organizations, or dates. That being said, this does require more time than the spidering technique, and also perpetuates subjective interests as the user has full control over what he/she decides to bucket.

Now it’s your turn! See what arguments you can make with bucketing.