A New Perspective on Digital Mapping

I feel the central takeaways of this class have not only enriched me in the digital humanities but in the benefits and cons of map making research of a particular topic. In our earlier readings, we discussed how maps our problematic especially in how a map maker chooses what information is and is not incorporated. Our first assignment particularly put us as researchers into the shoes of understanding how certain maps could incorporate too little or too much information.

For example, I had to analyze Conservatories, Festivals, and Opera Houses in Western Europe which was a 2-D map found in a French book titled Atlas Historique de la Musique. In this example we analyzed the pros and cons of the map and how it can be improved through digital aspects such as layering and multi media sources.  In regards to research, I was able to practice my mapping skills when documenting Josquin’s travels alongside DuFay however it proved to be more difficult than I anticipated. It made me realize that utilizing one source can be troublesome especially if the source is unclear on dates and information. This was specifically found in the Grove source (Josquin on Grove) that I had to utilize in order to pinpoint where and when Josquin had been in Europe. 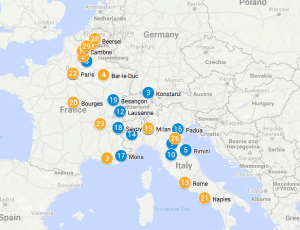 Map of Dufay and Josquin’s Travels via Google Maps

The information was often times very difficult to navigate since the source quoted various years that Josquin could have been in certain places. As a researcher I had to decide which would be the most reliable information which did not present a truly accurate representation of Josquin’s travels (Travels of DuFay and Josquin Google Map). This in turn made me discover that it is quite impossible to not make a map biased and that information in a source is biased which is why multiple sources at a time should be utilized.

In another part of my digital map learning, I was able to see a variety of digital maps and how creators presented their information or argument through them. 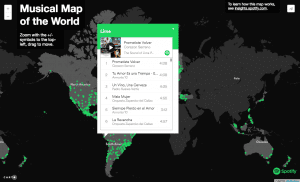 In reflecting on Eliot Van Buskirk’s Spotify’s Musical Cities, I felt that it was a great representation of music around the world however it’s flaw was that certain countries were excluded either because their music is not available on Spotify or Spotify is not a program in that country. I was also able to view other maps my peers had commented on and was presented with maps that weren’t geographical but rather were mapped by categories.

It truly shows that again maps our objective and sometimes information is intentionally excluded due to limitations. It made me reflect on the James Q. Davies, “On Being Moved/Against Objectivity” where he expresses, “The issue is having to choose in the first place, as if the world were a world of things, those things were readymade, and all that was left to scholars was to select from the range of available options: “canonical things” versus “quirks”;; “solid fare” versus “marginalia”; “Western things” versus “non-Western things” – good value or bad value; corn-fed or cage-free; organic or non-organic….” (80).

This is why we as scholars and researchers must read a variety of sources in order to find the most reliable information to incorporate into our own maps. Talking with Researchers over Skype helped put into reality that they too have problems in mapping. They all have the difficulties how showing how to present information whether if it was through dance with Harmony Beach and Kate Elswit who find it a struggle to map and show dance forms that are only presented through words through books or to classify race on Broadway through Todd Decker’s century map and how presenting “White” and “Black” can present problems. This demonstrates that maps will be objective no matter how much, how little, or how you present your information. This is helpful in guiding my individual project on Art Songs by Heitor Villa Lobos. I need to look through multiple sources to get the most reliable information. I also have to formulate how I should map my information and what information to include and not include.