This mapping platform by Eliot Van Buskirk scrapes streaming music giant Spotify’s playback data to demonstrate the musical sounds of different countries and select cities. Clicking on a city, marked by a green dot, displays a musical playlist illustrating the distinctive music of that particular city. Some cities near each other had largely overlapping playlists, suggesting similar tastes, while others boasted slightly different musical characters. Buskirk also creates the option to select by country in order to hear distinctive, emerging, viral, and popular music relative to the country.  Each city and country playlist is updated every week to represent the current musical tastes of the cities. 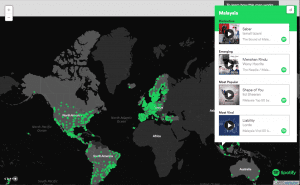