Music in the Gulag

Since I have extensive experience with Russian culture and much interest in Soviet culture, I decided to study the composers in the Gulag during Stalin’s era.

I quickly realized that the topic was too narrow, and so I broadened it to “Music in the Gulag.” If you google it, you’ll find a website for a conference that happened several years ago on the subject, and that’s about it. While a plethora of information exists on music in each individual camp (or the music of a specific composer in the Gulag), few have ventured to collect it into a source that helps someone understand what music was played and composed in the Gulag, where it was played, and the political and social implications of it all. I believe that my map could include many audio clips, pictures, and other primary sources and collect them into one database, essentially, of information on the music of the Gulag.

My first problem (if you’d categorize it as such) is that I am thoroughly interested in literature about the Soviets and the Gulag (which stands for Glavnoe Upravlenie ispravitel’no-trudovykh LAGerei, or, Main Department of Corrective Labor Camps). The topic draws me in and pulls me down a rabbit hole and then I am lost in this historical world full of hope, suffering, politics, and most importantly, music. However, when I focus too much on reading all about the literature that Zhdanov censured, I gather little information relevant to my topic and thus, waste time. So, all of the tangential information distracts me. Many sources detail the minutes of meetings of government officials that discuss the camps 1, or talk about musical representation in the Gulag 2, but few explicitly note who was where at what time and the exact events that occurred. On the other hand, the music of Matvei Stepanovich Pavlov (or “Azancheev”) lives on, while little scholarship on his life or what camp he worked in exists. It is either the scholarship or the music, but hardly both. Even modern CD’s are continually produced under titles like “Gulag Music.” 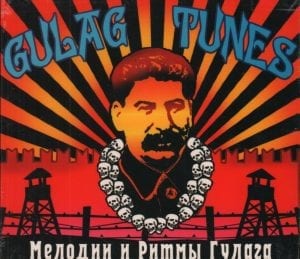 A 2006 album cover – “Melodies and Rhythms from the Gulag” by the band Gulag Tunes.

As I mentioned, researchers have already published books and articles about the music of the Gulags. On the map-making side of things, though, I must publish something unconventional that accurately portrays the camp life. Since people associate music with happiness and easing of suffering, I do not want to make a map that makes light of the suffering and hardship that the people in the Gulag went through. Just because music was being made, it does not mean that the lives of anyone involved were made easier. If the map only includes information about music-making or music made in the Gulag, then it may give the impression that the Gulag actually was not as horrible as we thought. On the contrary, the officials and guards harshly criticized the performances and beat and starved performers – prisoners who were able to stay out of the spotlight could avoid the criticism. Even though they faced harsh beatings and starvation should their performances fall under par, they carried on. Their music brought hope and an escape from the reality of their prison. An inexplicable phenomenon occurred when music became the reprieve and the downfall of many prisoners.

How can I convey that in a map? What visually encapsulates prose? What collection of polygons and fuzzy edges and lines and pin drops can show the tortured lives of these artists? What can give their stories justice? I think that the media I include will help with this greatly. If my map will work, it needs to include a plethora of information from every angle and perspective (a thick map 3 for sure), but also portray a narrative in a way similar to Ethington and Toyosawa’s ideal.4 Once I have a vision for how the map should look in the way that best depicts that narrative, then I think the real work will begin. For now, I end this post pondering how to describe both the mind of the imprisoned, the spirit of desperate survival and the body of works that lives on.