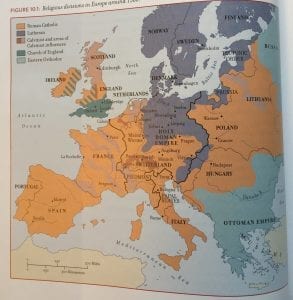 Religious Divisions in Europe around 1560

Coming back to this project in its fourth stage has been interesting on any number of levels…Perhaps the most immediate difference between the project as I approached it at its inception and my current participation is the step we have taken back – though not backwards – in order to appreciate the meaning of cartography and just how space-place are important to the human conception of the world, especially as it is studied in the humanities. That said, I would assert that we have returned to this project with a stronger sense of awareness for our place in the development of the Digital Humanities as a tool and a method for humanistic inquiry, as well as a greater sense of self as map-makers.

To that end, we have begun our semester’s work comparing what one does, or might do, with a 2-dimensional map on paper – such as this example from a musicological resource text – and how those same capacities might be enlarged by digital mapping. If you consider the adjoining printed map to the left, “Religious Divisions in Europe around 1560,” the immediate conclusion is that Europe was divided into well-established, separate religious domains. Moreover, insofar as these religious domains were Protestant or Catholic or Eastern Orthodox, their respective constituents were homogeneous in their affiliation to those creeds. Such conclusions are misleading at best, but they are effectively conveyed by the roughly sketched, shaded regions – what we might call drafting polygons over the political boundaries, since polygons are what we’ll deal with when we digitize the same phenomenon.

Now, polygons and shaded regions have their uses – as this digital map of “Slave Songs in the US” demonstrates. In the case of the following map, which we created using Google Maps, the overlain polygons demarcate the regions roughly outlined by the source for the information used to track the approximate spread of these songs. Because it was not accurate, both because of the source’s limitations and the impracticality of nailing a specific folk-song down to a single city, to merely drop the songs onto the map using pins and thus allow the unsuspecting user to surmise that the music never spread or shared roots with surrounding plantations, we chose to indicate the regional context in which certain musical themes developed.

The difference between using these kinds of regional indications on the aforementioned 2-dimensional as opposed to the digital map, aside from the different intent of each map, is that the creator as well as the user has multiple viewing capabilities on the digital version. Therefore, if the shaded polygons are less useful to understanding the map’s message or merely its portrayed information, the user may have the ability to remove them. Overlaps in the spaces are easily glimpsed, which may reveal to the map user that each polygon is merely a suggestion, not a concrete boundary of cultural divisions. At the very least, the user may interact with the points and the different video, photographic, or audio inclusions in the map in order to better understand the context – and the variety – of the various regions, rather than assuming each polygon to be contextually the same because of their strange boundaries or homogeneous colors.

Now, this is only one of many small, yet significant progressions in the approach to map-making which the digital method offers. Is it an all or nothing transition – must the digital cartographer cut all their ties to traditional map-making and explore uncharted waters, discover an entirely new methodology? Well, no. A number of the goals and the limitations of paper map-making remain inherent to the digital application of this …art. On the other hand, there are improvements, and there are new challenges. Certainly, no medieval cartographer had to worry about whether they could find videos to supplement all of their data-points, or whether they would have to make a judgement call on which videos were included. And yet, the process of elimination seems remarkably relatable…